If you read yesterday’s blog entry, you know that Bill’s BMW (or BMN as I call it — “Bayerische Motorarbeit Nicht” – Bavarian Motorworks — NOT), broke down in the most humiliating fashion possible – in front of a group of Harley riders. Also, Bob’s son has taken ill and the two of them decided to head back home to Colorado this morning.

So the first thing we did today on our vacation was to ride to the local U-Haul dealer to help them pick out a truck. They also bought some straps and we all went back to the Hampton Inn East in Flagstaff to load them up. 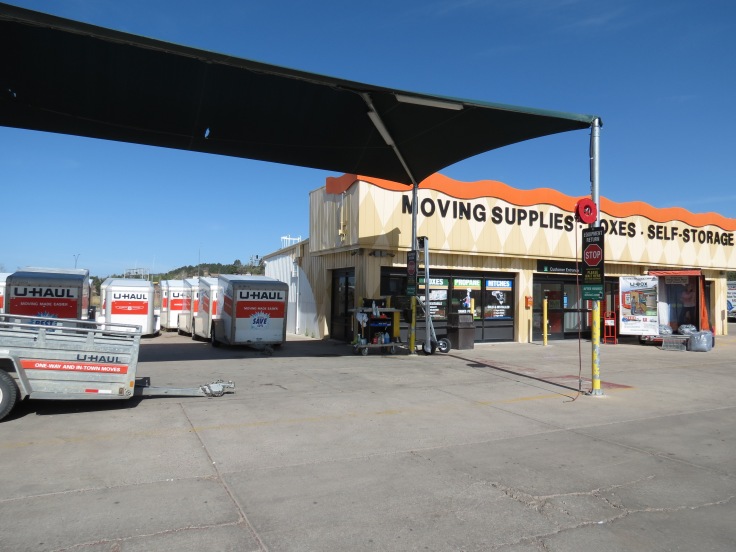 Although this is a nice facility, the Route 66 U-Haul in Flagstaff is not on any biker’s bucket list.

The hotel thoughtfully provided this raised dirt wall ideal for riding motorcycles onto a U-Haul truck.

We worked as a team to load the bikes, get them strapped in and secure and then sent Bob and Bill on their way. We learned this evening they made it home safely.

I played my usual role as trip photographer as Bill (prone by the left wall), Bob (red hat, right) and Clive (in front of Bob) worked hard while Dale silently but effectively communicated his disapproval of their efforts.

After yesterday’s aborted attempt to visit the Grand Canyon, we were determined to get there today. We made it just outside the Visitor Center when we suddenly realized none of us had eaten since breakfast and it was almost lunchtime. So, we made an emergency stop at a steakhouse and I grabbed a quick photo of my remaining riding companions before we went in.

Clive’s not delighted to have another picture taken but Dale is – in fact, he’s putting his arm around his invisible friend Herbie, whom I mentioned yesterday. Whatever Herbie’s corporeal reality, he doesn’t touch a thing on the plate when Dale orders meals for him.

We watched this impressive line of Vipers coil its way into the parking lot as we prepared to enter the restaurant. Unlike the British cars we saw outside our hotel on last year’s trip, this collection is all-American and appropriately parked at a steakhouse. Bring on the beef.

And then, at long last, we made it into the Grand Canyon. Well, not “into,” per se, but right on the edge. You’ve no doubt heard this, but it’s impossible to capture this awesome place with photographs or video. It’s perhaps the most majestic thing I’ve ever seen. For reference, it’s 277 miles long, so you can only see a small part of it and along the South Rim, it’s nearly a mile deep.

I noted to Dale and Clive that it’s such a profound thing to see that we found ourselves talking in hushed tones – as though we needed to be reverential in its presence. As this nearly-spiritual sensation became almost tangible, I was reminded of one of my core beliefs:

No matter how spectacular the terrain, any backdrop can be improved by putting our group of riders in front of it.

Dale complained this morning that my pictures make him look bad. “Ugly” is the exact word he used. I showed him this picture to prove that I wasn’t out to get him; in fact, I think he bears a similarity to Mark Ruffalo here. He immediately pointed out that – technically – I didn’t take this picture; after all, I’m in it. It was shot by a visiting Chinese gymnast who actually perched himself on the railing.

We dropped in unannounced on the Grand Canyon Visitor Center (no one seemed to mind) and checked out some of the exhibits.

Both handicap-accessible doors opened automatically when Clive and Dale stepped in front of the entrance, but I think they’re actually meant for people with physical limitations.

It’s a little astonishing to walk from the rim of the Grand Canyon where it stretches on seemingly forever and then see this diorama, which proves you’ve witnessed only a tiny fraction of it. 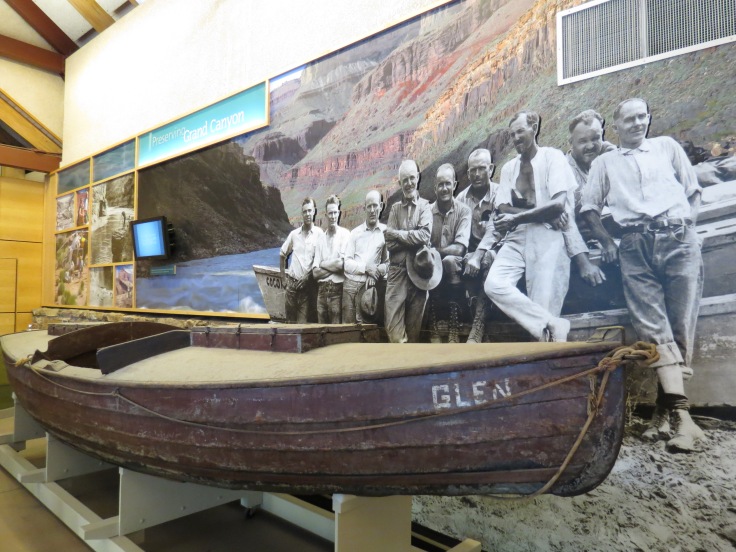 This is one of five boats used in a geographical survey done by the nine men in the top right back in 1923. They rode 84 sets of rapids and carried these 900lb boats when the water was too shallow or they needed to ford falls. They were surveying for places to dam the canyon, which fortunately never happened. It would have damned the canyon.

After wrapping up at the Visitor Center, we mounted up and headed back towards Flagstaff, on our way (or so we thought) to Sedona, AZ. We stopped in Flagstaff for gas and I attempted to make hotel reservations. Rosalind Fassett, who is my sister (and Clive’s in case you’re unaware that he and I are brothers), lives in Phoenix, knows the area well and spent some time generously researching various hotel options in Sedona.

We were astonished at how steep the hotel prices are in Sedona, particularly given that it’s off-season (for example, the Hampton Inn there is $229 a night). We were more astonished to learn that there were absolutely no rooms available tonight at any price in Sedona. Websites like Bookings.com and Expedia literally showed no available rooms in town.

So, we stayed in Flagstaff at the Hampton Inn, East Side, just like last night. It’s a wonderful hotel; nearly new, very comfortable, staffed by extremely competent and friendly employees and an absolute bargain at $122 a night, including taxes. Clive and I also took advantage of this nice facility to do our laundry. Before he and Dale tell you, I will admit that I forgot to add detergent. On a relative basis, though, our clothes smell cleaner.

This also allowed us to walk across the parking lot to Oregano’s again — we gorged on Italian food there last night – I was even able to enjoy wonderful gluten-free pizza, words that rarely go together.

But tonight, we knew we should eat healthier.

We all enjoyed our salads at Oregano’s. All we had was salads, although Dale and Clive did splurge a little on zucchini sticks. I promise that we did not subsequently have huge Italian meals. I swear. I mean it. For real.

So tomorrow, we head to Sedona, Arizona and points beyond to be determined. It’s going to be in the 30’s when we get up, so it will be another brisk day. It should be fun.

I want to wrap up today’s write-up with a response to certain critics who have accused my blog of serving as a great representation of what is frequently called “fake news.” I reject that idea. I don’t believe that my observations on my fellow riders’ various flaws, idiosyncrasies, foibles, limitations and odd behaviors are news at all. At least, not to anyone who knows them.

Goodnight from Flagstaff, AZ. And yes – I promise we will ride safely.