The day started out normally enough – two dogs on a cliff overlooking our hotel barking at all of us in the parking lot. You know how that is.

This is the bluff behind the Santa Fe Inn. Too cheap to provide alarm clocks, they offer alarm dogs instead.

After a quick breakfast, we hit the road for Monument Valley. 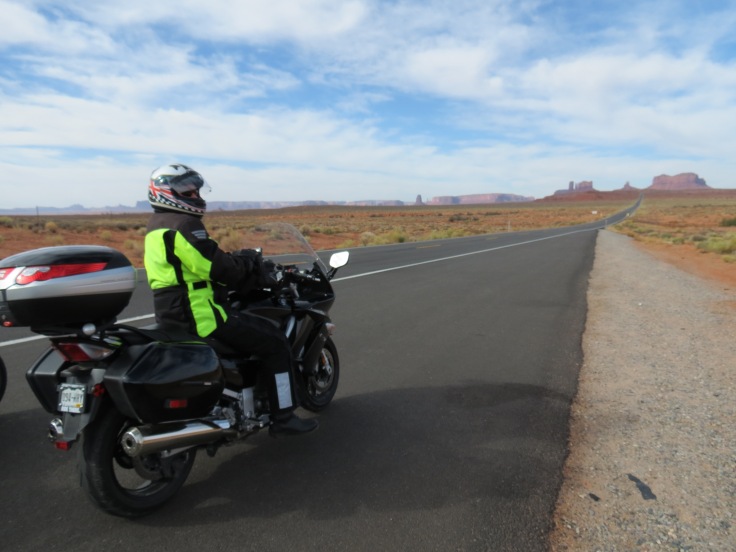 Clive in the lead. You may recognize this as the road where Forrest Gump gives up on running.

We saw three guys running on this road, one of them looking very much like Forrest Gump. A small SUV drove alongside, four-way flashers blazing and a cameraman with professional equipment hanging the window out filming them. No idea what was behind that, but it was interesting.

Monument Valley is stunning, as you might expect from the name.

However, by now you know my philosophy. Any great wonder of the world can be improved by placing motorcycles and motorcyclists in front of it.

We pulled over and lined up, hoping to find a volunteer to take our picture when a young woman emerged from an RV carrying a professional camera. She used my travel camera but the equipment was a tip-off: she was very good. Her name was Beatrice, she was French and she spoke virtually no English. However, using the universal language between photographers (I took a shot without me in it and motioned for her to approximate it), she took some great shots.

The Official Group Photo from the 2018 Great Motorcycle Adventure. It has to be since, due to unforeseen events, we won’t have a chance to try again. See story for details. 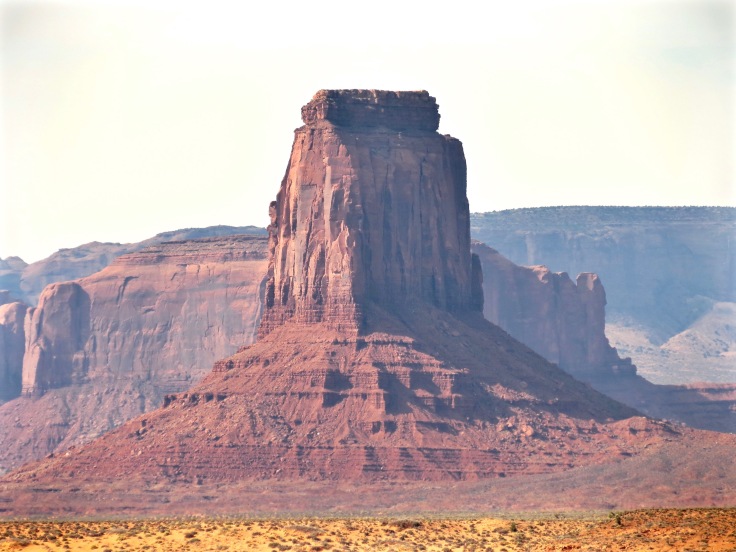 We then rode to Kayenta, Arizona. We just stopped for gas but if it had been time to eat (and if it had been open; it was Sunday and lots of places were closed), we definitely would have eaten at The Blue Coffee Pot Restaurant and skipped the fast-food joints in the background. Wouldn’t you? 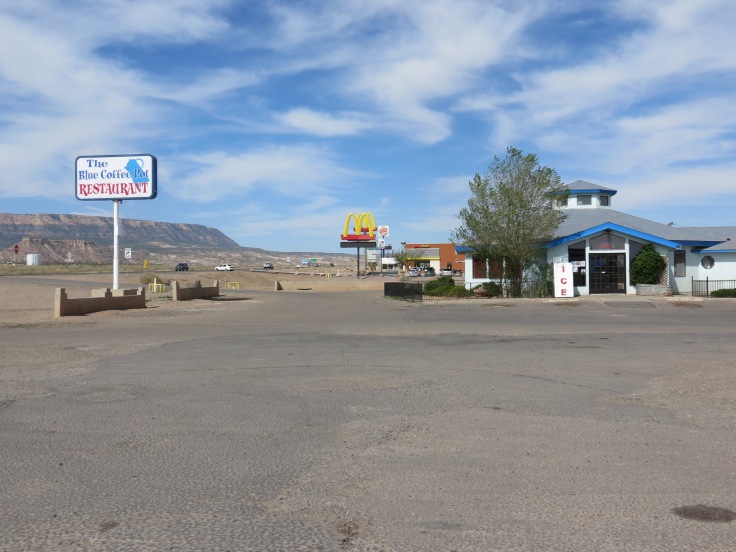 Kayenta is also the home of Jo D’s Laundry, upon which some artist has applied this wonderful mural, bringing a spirituality to laundry that has not occurred to me before.

Next it was off to Glen Canyon Dam. I’ve been reading about this engineering marvel for years – mostly in works by Edward Abbey, the original eco-terrorist who dreamed of blowing it up (I’m not endorsing this!) The dam was built in the ‘50’s, back in the days when grand engineering marvels were commonplace. To wit, check out the massive rock mountain they cut in half — just to make room for the visitor center parking lot.

We get ready to visit Glen Canyon Dam. Dale is shaking hands with his invisible passenger, Herbie. There is some growing concern in the group that Herbie may not be real, which has certain implications for Dale’s sanity.

Despite the sign, none of the visitors we talked to were named “Carl Hayden,” so apparently you can get in no matter what you’re called.

The visitor center has grand windows through which you can see both the dam and the bridge. We were just a little late to make the tour, but that’s water over the dam. And under the bridge.

Note the rescue boats. Lots of people must fall off of that bridge because the boats were packed full.

Inside the visitor center is an interesting representation of the regional geography displayed on what cartographers call a “cylinder map thingy.”

Bill thought he had found the only window in the place and that it was an overhead view of the map and bridge. I pointed him to the 100’ of real windows right behind this diagram. 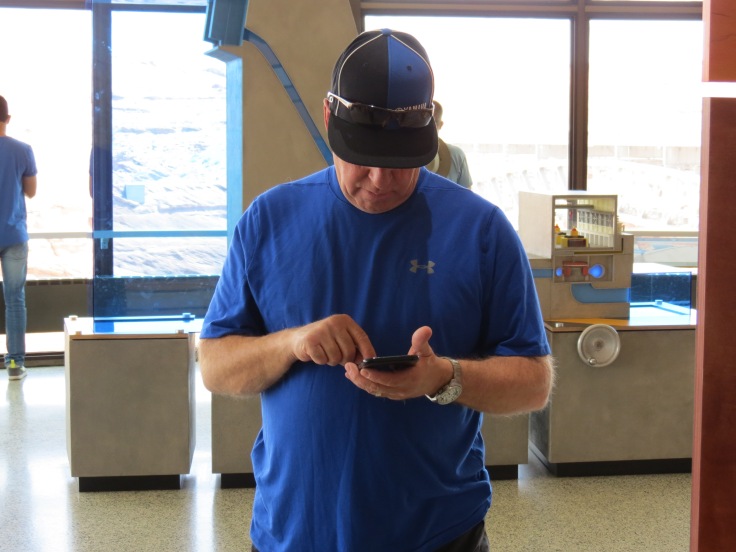 The majesty of the engineering marvels around him inspired Clive to play Candy Crush on his phone.

I wish I was kidding when I say that we were in the visitor center for about 30 minutes and about to leave when we discovered we could go outside and see the dam from the other side of the glass. We came upon this stunning revelation as we gazed out the window and a young woman walked in front of us. Here’s what we saw when we ventured out the door:

Obviously, a breathtaking sight like this could stand some improvement, so: 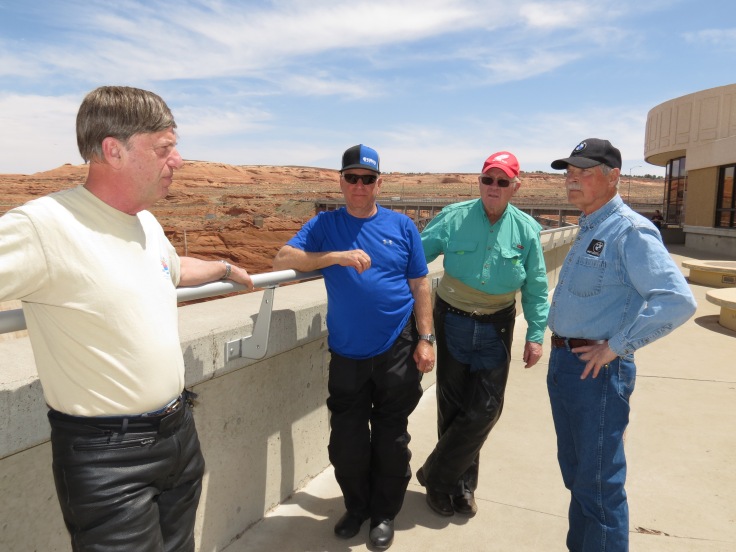 After taking in the sights, Dale suddenly yelled, “Staring contest!” and Bill jumped to the challenge as I took photos and Clive and Bob acted as judges for the impromptu competition. At least this time they did this while they were not riding.

After the contest – which ended in a tie when those of us not participating stopped caring – we rode into Page, AZ for some lunch at Big John’s BBQ.

Clive polishes off an entire bucket of fried chicken by himself while I have a salad and sautéed peppers (foreground).

After this delicious meal (and it really was excellent), Dale and I engaged in some photo hijinks.

I did my “Big John, the Happy Cowboy” look.

Dale did his “Big John, the Constipated Cowboy” look.

We then rode to Cameron, AZ, where we gassed up at the Navajo Trail Trading Post. The Navajo Trail Trading Post (or “NTTP” as the locals probably call it), is sort of a fascinating place. We ran into a group of about 20 Germans who had flown in, rented Harleys and a chase vehicle and were riding across the United States. It was interesting to contrast our two Americans on German bikes with the Germans on American bikes. I guess the gas really is greener sometimes.

I also saw this remarkable piece of artwork at the NTTP: 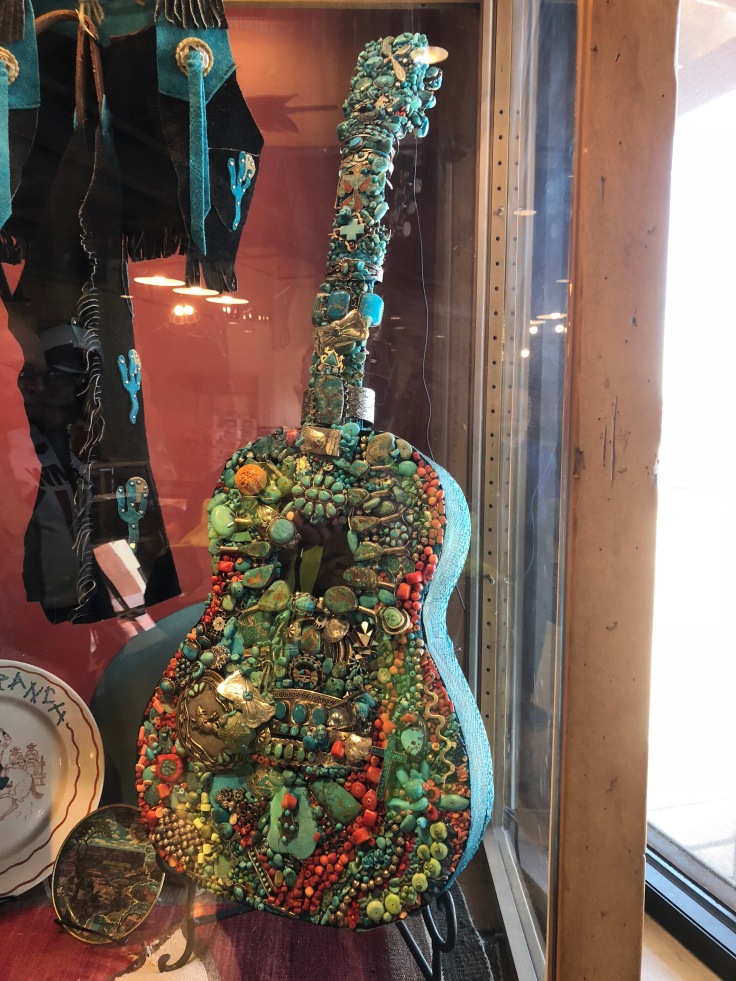 Note the snakeskin on the edge accompanying the studded surfaces elsewhere.

We left the NTTP and headed to the highlight to our day – the Grand Canyon! Getting there from the Post requires a 50-mile run to the entrance, where we lined up behind the other vehicles waiting to pay for admission. I was in the lead as we idled, inching forward, when Bill suddenly pulled off to the side and slammed his BMW to a halt. The clutch had broken.

I am not kidding when I say that a group of five Harley Davidson riders looked over as Bill climbed off his obviously-stricken bike. You could see the “I told you so” look in their eyes. If you know anything about motorcycle culture, for a BMW rider to suffer a breakdown in front of Harley owners is about as humiliating as it gets. I acted like I didn’t know Bill until the Harleys made it through the gate.

After much fiddling and some serious consideration to just leaving him there, we decided we would all turn around. There’s a scene in the movie Apollo 13, where the astronauts discover they will not be able to complete their mission due to mechanical problems and Tom Hanks’ character says, “We lost the moon.” Well today, we lost the Grand Canyon.

Thus began the 50-mile ride back to the Navajo Trail Trading Post, where we attempted a hopeless and ultimately futile parking lot repair of the BMW’s clutch. 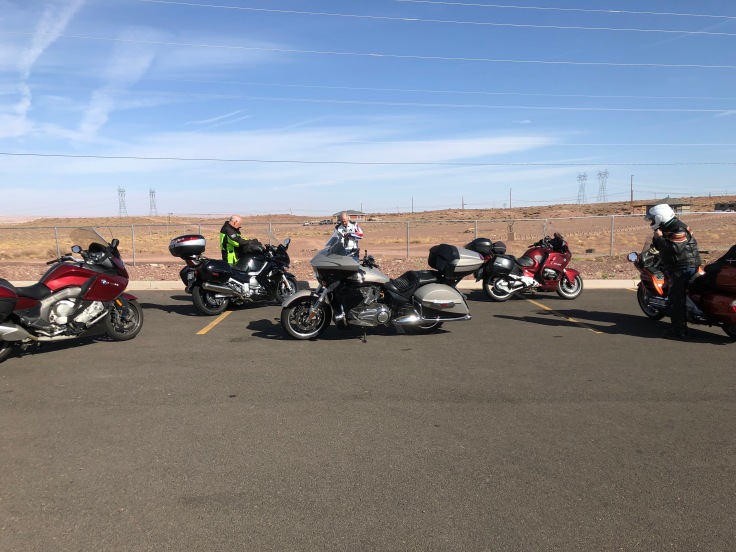 The red bike towards the right is the guilty culprit. We shall now call it a BMN for “Bayerische Motorarbeit Nicht” – Bavarian Motorworks — NOT.

We pushed Bill to a rolling start and he scooted down the highway with us following him to our new destination – the Hampton Inn in Flagstaff, AZ. Fifty-four miles later, through incredible winds that caused me to toss out the sea anchor on my land yacht a few times, we rolled in, checked in, and had dinner at the pizzeria across the parking lot.

But wait, there’s more: Bill recently bought a late model Honda Gold Wing in excellent condition. His BMN is 22 years old, he bought it used and he believes it was poorly-maintained by the previous owner. Yet he did not ride the Gold Wing because he did not want to scratch it. I say take it off of the pedestal in your living room and ride it, Bill!

However, he is paying the price, as tomorrow he is renting a U-Haul truck, loading up his stricken steed and riding home to Colorado.

That explains one of the two riders departing our group unexpectedly tomorrow. The other person leaving is Bob Steffen. Bob has been the true gentleman of the group and I’m sorry to report his son was suddenly taken ill, so he is going to load up his bike with Bill’s and drive back with him. Bob – all the best to your son and your family and I hope he recovers very, very quickly and completely.

We’ll miss both of our riding buddies for the rest of this trip. Bill and Bob have greatly enriched the ride this year and now I’m stuck with Clive and Dale again. In fairness, they are stuck with me and I’m the one writing the blogs, so I guess they have it worse.

Goodnight from Flagstaff, AZ. No idea what tomorrow will bring but check this space to find out yourself.