Ed Gerber may be the finest salesman in the world. I say this because I kicked off the last morning of our ride like this: 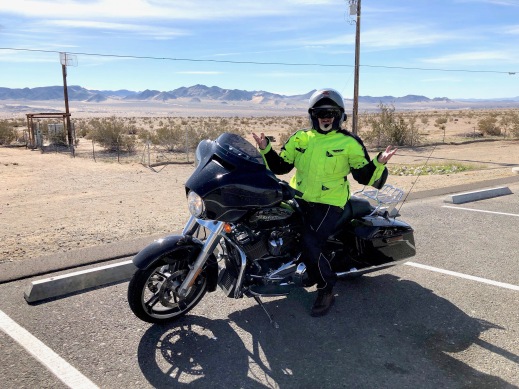 That’s right – that’s me, back on the Harley. Ed convinced me one last time that he REALLY needed to check out one of the BMWs. He just could NOT decide which one he preferred.

I think Tom colluded with him because he decided that he wanted to try out the OTHER BMW since he hadn’t spent much time on it. Or maybe he was just opportunistic. Or, come to think of it, just smarter and less gullible than me.

Anyway, it was cold, I was on a Harley with no windshield (to speak of), no heated grips or seat and it was a long, boring interstate. Heller on the highway to Hell.

We pulled over at a rest area and when we got off the bikes, Ed said, “Hey Tom, you look like a real motorcyclist – tall, lean, dressed like a pro. You look great!”

I said, “Hey, what about me? Tom and I practically look like twins!” You can judge for yourself: 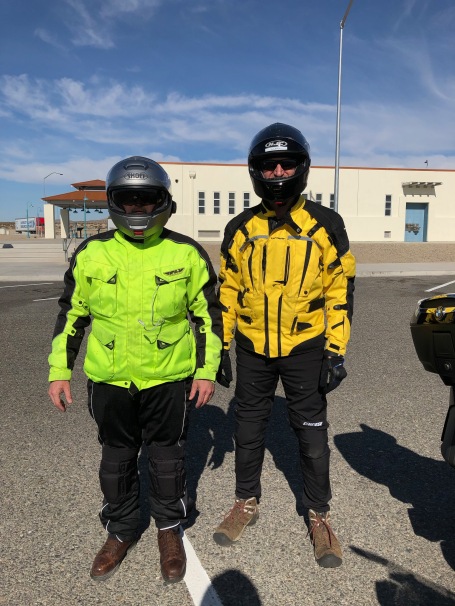 Hey, if Danny DeVito and Arnold Schwarzenegger can be twins, then I think Tom and I can pull it off. On the other hand, I’m the Danny DeVito in that comparison, so never mind.

We only made one other stop; I took this picture of Ed about to take a picture because he apparently loves desserts – he talked about some “All-Reese’s” store he’d been to that had candy like “EddiesWorld” does (although he had the sundae). 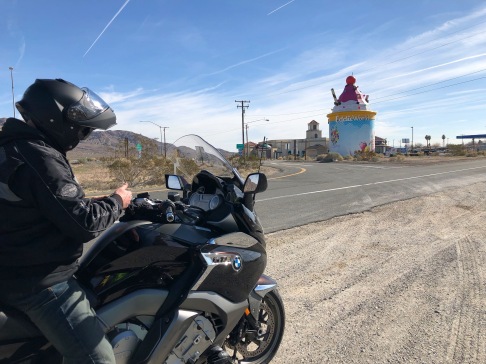 EddiesWorld is a desert dessert oasis.

The rest of the trip was uneventful. I finally stopped by the side of the road to claim a BMW back from Ed and we rode on into Las Vegas. We gassed up, said our goodbyes and headed to the airport.

So now, it’s been a couple of days since we ended the ride. I didn’t have many pictures of that last morning and I wanted to offer something interesting to the readers who have followed this brief adventure.

And, I have two things. I absolutely guarantee that one of these is either true or false while the other may or may not be authentic. I look forward to your speculation as to the veracity of these claims.

I went to write a review of EddiesWorld on Yelp — which I had mentioned to Ed and Tom. It’s a very unusual place and I’m sure this didn’t surprise them because I used Yelp to choose most of our restaurants on the trip. As you have probably guessed by now, Ed is quite the prankster and he found his promised revenge – not in the form of a retaliatory blog — but instead by writing and posting this review of Eddies on Yelp: 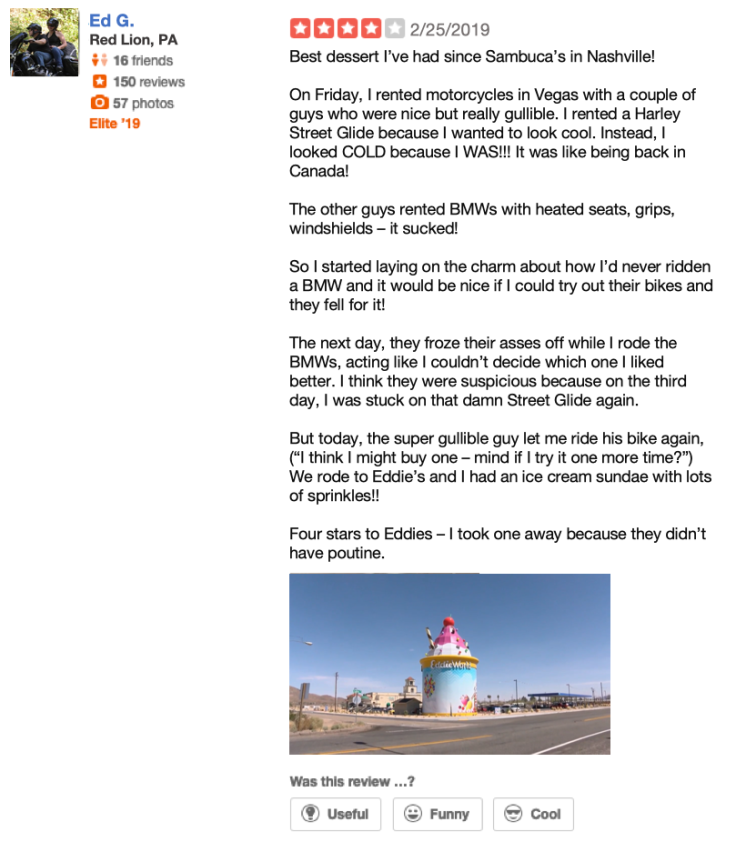 Ed declared on the trip that he loved the BMWs so much that he was likely to buy one – perhaps even this very week. He could probably tell I seemed a little skeptical because he continued: “You don’t understand – when I make a decision like that, I move fast!”

Remember that Ed arrived home yesterday. And today, Tom and I got this email from him:

To which Tom cleverly replied:

Now, ignoring for a moment the complete lack of accountability in blaming Tom and me for his irresponsible, impulsive purchase of a very expensive motorcycle, consider this:

Until five days ago, Ed had never ridden any brand of motorcycle in his LIFE except Harley Davidsons. Then he spends a few part-time days on a couple of BMWs and he’s suddenly a convert.

There are many, many fine motorcycles out there. Great brands from Japan and Europe, not to mention at least one other US brand – Indian – that many former Harley riders choose. Ed chose not to test-ride any of these brands. He just bought one of the two models of BMW he happened to ride last weekend.

For the record, this is the model (although he no doubt has added many accessories; Harley guys do that): 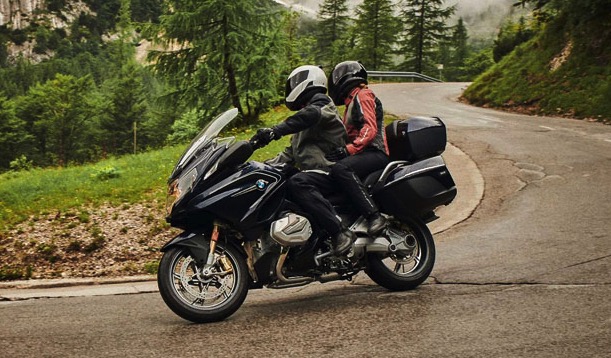 Ed’s current bike – ironically, a Harley Davidson Street Glide – is the “CVO” (Custom Vehicle Operations) edition. That means, among other things, it’s a “high performance” model. This bike was “dyno’d” (tested for horsepower and torque) by a motorcycle magazine. The engine produces about 96HP and 111 ft/bs of torque (higher is better for both). Harley claims it weighs 877 pounds, ready to ride (with gas, etc.)

The BMW’s engine was dyno’d at 128hp and 101 ft/lbs of torque. That means it has 30% more horsepower and almost as much torque. But the bike only weighs 615lbs – that’s 262 lbs lighter than the Harley!

Think of it this way: the Harley has to move more than 9 pounds with every horsepower while the BMW has to move 4.8. In other words, it has almost twice the “power to weight ratio” compared to the Hog.

The End of the Road

I want to thank Tom and Ed for their patience and understanding as I kept asking us to stop, line up the bikes and take pictures. We discussed how much more fun motorcycle riding is when you’re with low-maintenance travelers and they definitely fit the bill.

But there is one last thing…

Tomorrow, Tom is flying to Germany. He’ll be there for more than a week. He claims it’s for business, but his BMW blue-and-white eyes had a twinkle in them that may indicate he’s going to do a little shopping while he’s over there. I’m thinking a factory tour, direct-from-factory purchase and an RT1250RT in his garage in a few weeks. If that happens, you’ll read about it here first.

Thanks for riding with us. Maybe we’ll see you on the road somewhere. Ed will be the one wearing the Harley jacket but sitting on a black BMW. Tom will be the one who looks like a real motorcyclist. I’ll be puffy bumble bee guy taking pictures. Smile!