The King of Cool Kicks off His Farewell Tour 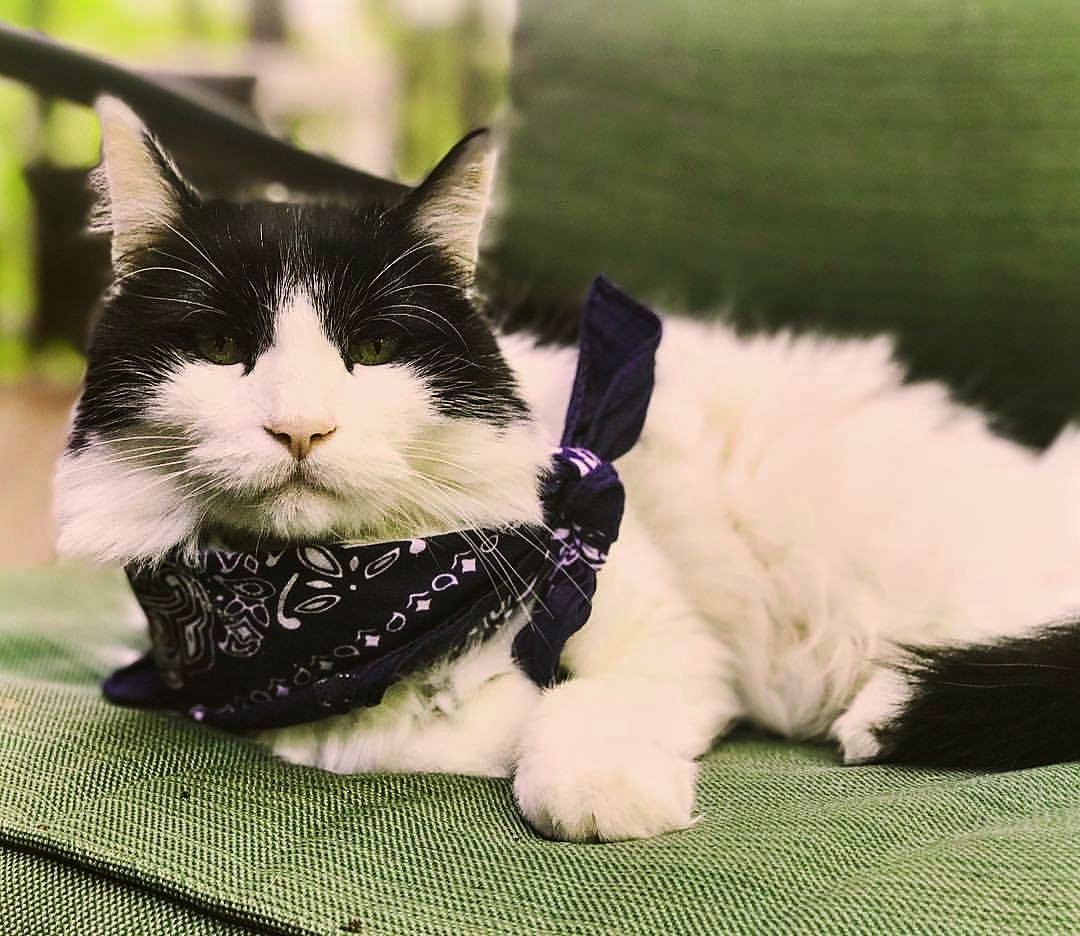 We learned late yesterday that Phil, our 16-year old cat, has lymphoma and won’t be earthbound much longer. It was a very emotional evening for all of us humans, although Phil didn’t seem to be perturbed by the news. Upon his return from a day at the vet, he ate a whole can of cat food, hopped onto Penny’s lap and luxuriated in her unusually abundant (but in his view, richly deserved) affections.

We adopted Phil (or rather, he condescended to move in) with his sister, Lil, when they were tiny kittens. On his way to becoming a 17-pound hunter (he’s likely part Maine coon), he fell from the second floor of our Boulder house (landed on his feet), climbed up a window screen only to pull it loose from the top (landed on his back) and established a mostly-benevolent order in three different neighborhoods.

He’s shown remarkable patience with dogs – his tiny friend Macy kept annoying him until he flipped her over on her back and pinned her with a harmless but meaningful paw across her neck until she stopped struggling — twice. It was a move worthy of a world class WWF wrestler and Macy resorted to quick kiss-and-go’s from thereon, demonstrating the proper deference towards the king.

He’s shown no patience with pretenders to the throne, including a fox in the yard of our Georgia house that shot towards a sitting Phil, who didn’t run, didn’t turn and didn’t even flinch. The fox braked to a sudden and surprised stop as the cat he had perceived as prey looked at him imperiously. When Phil finally and casually came to his feet, the fox backed up, yipped, and then turned and ran away to inform the den there was a new sheriff in town.

When we moved away from Boulder, a neighbor wrote that she was afraid of the pending chaos that would ensue after Phil left. “It’s like the mafia leaving town,” she said. When we left Georgia, Phil entered our house there during a “realtor’s party,” bringing with him a live chipmunk, which he dropped into the middle of the proceedings, scattering agents onto kitchen counters and into adjacent rooms. Under the guise of contributing a dish to the party, he perfectly executed his plan to communicate his alpha status to strangers in his home while immensely enjoying the ensuing chaos.

Phil has been an indoor/outdoor cat his entire life and we really thought that someday he’d just disappear, finally losing a battle with some other predator. According to the “Cat Calculator,” he’s 108 years old, meaning he was over 100 when he got into his latest scrape with a rival feline a few months ago – fierce combat we observed only through his post-battle scars.

One eye swollen shut, cuts and bite marks everywhere, we said, “Phil! You’re too old to be fighting other cats! Look at you!”

“You should see the other guy,” he communicated through his haughty gaze.

This was followed a couple of weeks ago by Blaine and his girlfriend Torrey discovering a crime scene in our driveway: Phil’s fur scattered on the ground, surrounding a perfectly-detached and intact squirrel’s tail, the rest of the victim’s body either disposed of or digested.

A handsome cat and aware of it, Phil was not above admiring his visage in mirrors or sporting bandanas and ties as any feline Beau Brummel should.

He was confident in critiquing the fashion choices of his human companions, trying repeatedly to warn Blaine against wearing his bright purple, off-the-rack and cheaply-made graduation gown and cap. Indeed, he refused to attend the ceremony, preferring instead a little more “me” time – and wouldn’t everyone prefer Phil’s company to any other alternative? Phil certainly does. 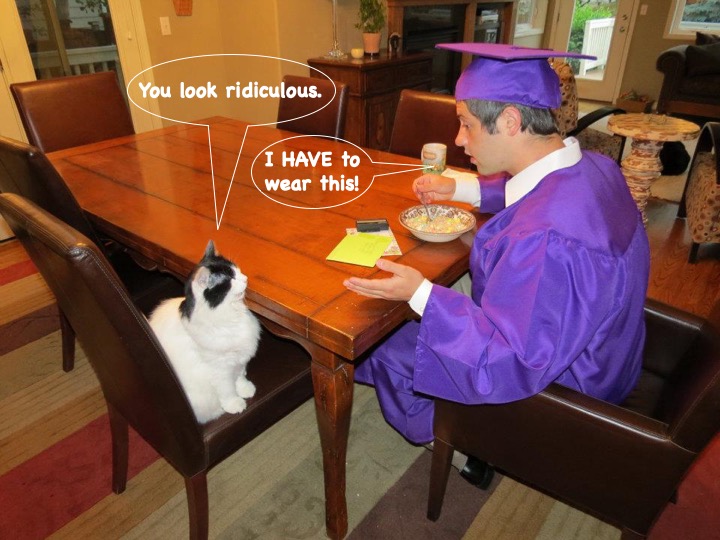 Still, Phil was often affectionate, or perhaps just accepting of adoration, so he’d deign to join in cuddling, either a lap at a time or in group settings. In his remaining days here, he’s going to get a lot of that, so I hope he’s amenable. If not, he’ll no doubt head outside to start one more street fight or find one last victim.

It’s likely there’s a feline afterlife, of course. Such regal creatures couldn’t have possibly achieved mythical status among so many civilizations bereft of souls. I agree with Blaine, who told me last night, “When most cats get to heaven and meet their God, they’re awed and excited. Not Phil. He’s gonna say, ‘Thanks for keeping my seat warm.’”

So, Phil, farewell and Godspeed on your upcoming journey to your new kingdom. Sorry we’ll be stuffing you with pills while you’re still in our dimension, but we’d like to keep you around as long as we can. Thank you for enriching our lives, warming our laps and blessing us with your presence. We’re going to miss you because we love you and adore you. But of course, you already knew that.

Pretty soon, the King of Cool will be gone. There won’t ever be another one but we’re richer for the time we had with our big, confident, unintentionally funny but never embarrassed cat. Safe passage, my friend. See you on the other side.