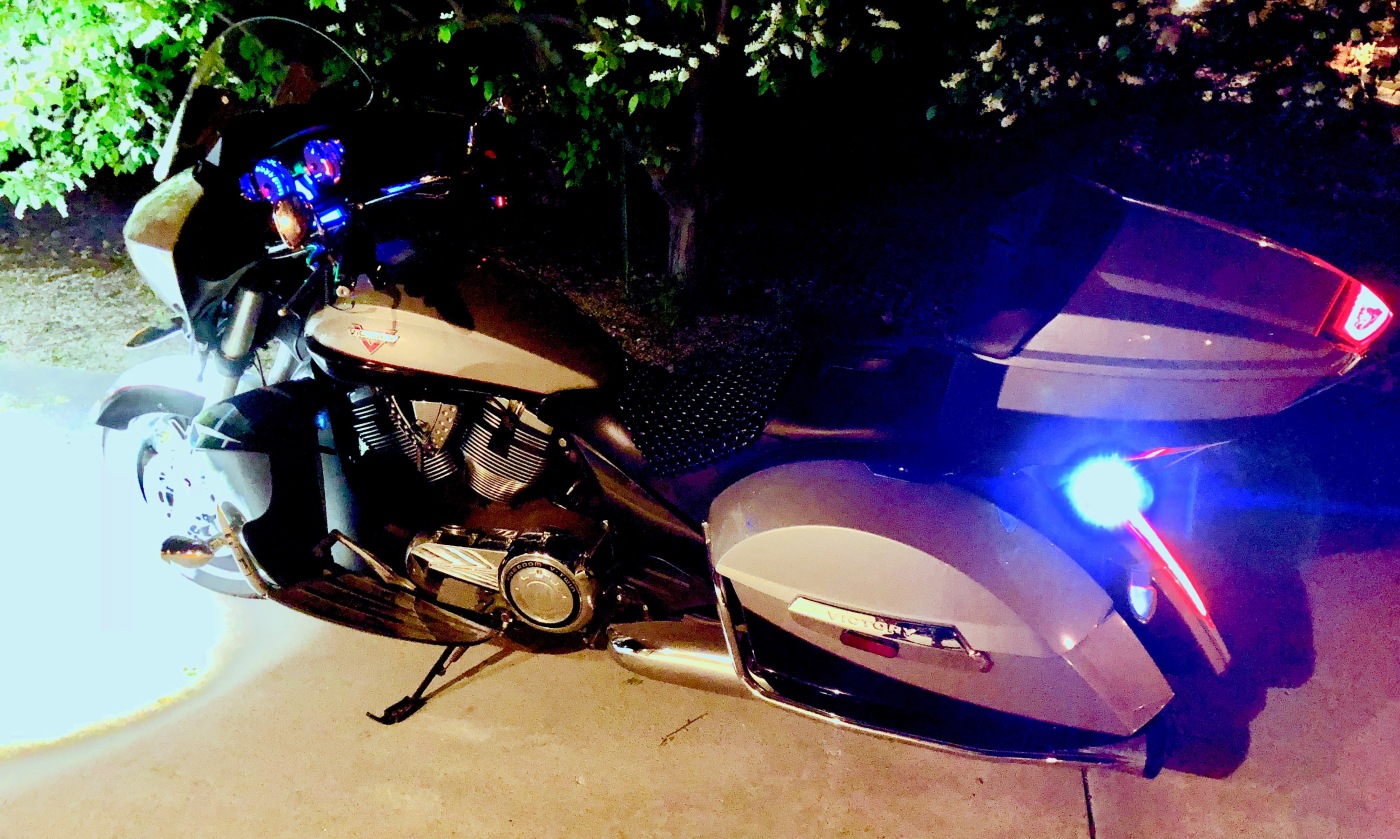 It will surprise my regular readers to learn that we survived the night in Quemado, NM with no incidents. Our luck continued on the road to Gallup – the tire on Dale’s BMW held out until we arrived Speedway Powersports where Dale purchased a used replacement that was nearly the right size. Chris, the owner, is a kind and generous young man who told me more than once, “We really try to help out travelers.”

Chris took a break from setting up the swap meet at his store to fetch the tire he sold to Dale for only $20. However, Dale won the “strongest grip” contest, shown here just before it began in earnest.

We strapped the tire onto the seat of Clive’s bike and rode to a dealer less than a mile away so they could mount it on Dale’s bike.

We made it! Dale can at last retire his tire after many harrowing miles on the cords of his worn-out front carcass. Interestingly, I didn’t notice that cleverly-camouflaged Blazer on the right while we were parked at the shop. It’s barely visible in this photo! You’ll also note that it has no license plate and the driver’s door is cracked open. My guess is that this vehicle was driven by government agents surveilling Clive. The reasons are obvious to me, but I can’t share them here.

Kevin, the shop owner at High Desert Cycles, told us it would be 90 minutes before the bike could be ready, so we walked to breakfast to plan out the day. Additionally, while the used tire Dale had bought was the same inside diameter (has to be in order to fit) the profile (the thickness between the inner and outer diameter) was a little bigger. We assumed it would fit but make the bike handle differently. Additionally, we had no information about the provenance of the new used tire, so we decided not to do any extraneous recreational riding and instead head to Del Norte, where Dale lives part-time and park the bike there.

As I looked at the map, I realized I was a mere 520 miles from home. This would be through mountain roads but even so, nine and a half hours of riding would bring me back to my baby (Editor’s note: that’s you, Penny).

My chosen route home (in blue) took a little longer but led through valleys surrounded by snow-capped peaks and I rode almost entirely on two-lane roads.

I told the boys I was going to head home a day early. They hardly argued at all and I think there is a message in there for me. But in any case, we walked back to the shop together and took one last trip selfie.

As is tradition, we improved another scenic background (in this case, High Desert Cycles in Gallup New Mexico) by standing in front of it. Thanks for a great trip, gents.

We all shook hands and then hugged it out and I mounted up and headed off. In the wrong direction, at least for a few miles. Apple maps had decided that I should take the fastest route after all and tried to reroute me through Albuquerque. I exited, rode uncomfortably near the shop where Clive and Dale were waiting for repairs, hoping they couldn’t see me, and then got back on the road home, passing Shiprock, Farmington, Durango and my sort-of hometown of Del Norte on the way home.

Clive called while I was riding to tell me that the new used tire didn’t fit Dale’s bike after all. It would mount on the wheel but the higher profile meant it rubbed against valuable and important parts of the motorcycle, not to mention making it impossible for the wheel to turn. However, the shop owner had ordered a new tire of the same size tire for another customer and while it wasn’t a perfect choice for Dale’s bike, it was vastly better than a night in Gallup, awaiting rescue by a friend with a trailer. He told Dale that his other customer could wait a few days and mounted it on the BMW. Many motorcycle shops are this service-oriented; do not expect the same from auto dealers while traveling by car.

So, a couple hours after I left Gallup twice, Clive and Dale left once and were able to do some recreational riding after all before heading to Del Norte themselves. We checked in by phone and text (text via voice; don’t judge) and all arrived home safely.

Reflections on the 2018 Tour and Reclaiming Your Youth

Motorcycling is inherently risky but it’s extremely addicting and it’s hard to pin down the active ingredient. I think the best explanation I’ve heard comes from my good friend, John Pendleton. Someone asked him why he rides motorcycles even though it’s so dangerous and he replied, “What would you be willing to do to feel 20 years old again?”

When you’re 20, not only are you optimistic about your future, but you believe you are in control of your destiny and you take risks because you feel invulnerable. As we grow older, the inertia of our responsibilities and limitations (perceived or otherwise) saps our energy and our optimism; we concede to our fears and call it maturity. Climbing on a motorcycle brings back both the thrill of danger and the sense of control. Every movement you make is magnified immediately through the throttle, the bars, the brakes — life shifts into high gear, whatever gear you’re in.

Motorcycling is meant to be an adventure and that involves facing danger. But that’s a good thing: Alain Gerbault, who sailed around the world by himself over 700 days and 40,000 miles in 1892, wrote, “Adventure means risking something.”

Given the e-coli outbreak, we suffered some risk by eating a couple of romaine lettuce salads on this trip and we stayed in some “downscale” motels but those experiences don’t qualify as adventues.  Balancing out the risk must be adrenaline-inducing thrills; in our case speed, leaning over in corners, braking satisfyingly hard and then accelerating even harder. Even occasional fun moments on gravel and “asphalt snakes” (those allegedly-temporary repairs made of slick tar that get more entertaining as they warm up) added to the thrills.

We had some things to wrong on this trip – Bill’s broken bike, Dale’s worn-out tire and my imperfect navigating, but that was all part of the experience: Yvon Chouinard, the billionaire founder of Patagonia and lifelong adventurist, wrote, “The word adventure has gotten overused. For me, when everything goes wrong – that’s when adventure starts.”

So a motorcycle trip qualifies as an adventure, at least to me, because it’s risky and things go wrong, but mostly because it makes me feel 20 years old again. These are related as noted but reclaiming my youth when I twist the throttle and lean the bike over makes it not only worthwhile but – critically – thrillingly addicting.

Thanks for coming along virtually on this year’s great motorcycle adventure. I understand why some people are reluctant to ride; the risks are substantial and people need to decide for themselves if they want to incur them. However, I do believe that everyone would benefit from finding their own adventures that include risks they can tolerate.

Goethe said that “The dangers of life are infinite, and among them is safety.” Spending your life avoiding all risk means not living at all.

See you next year (and maybe sooner).