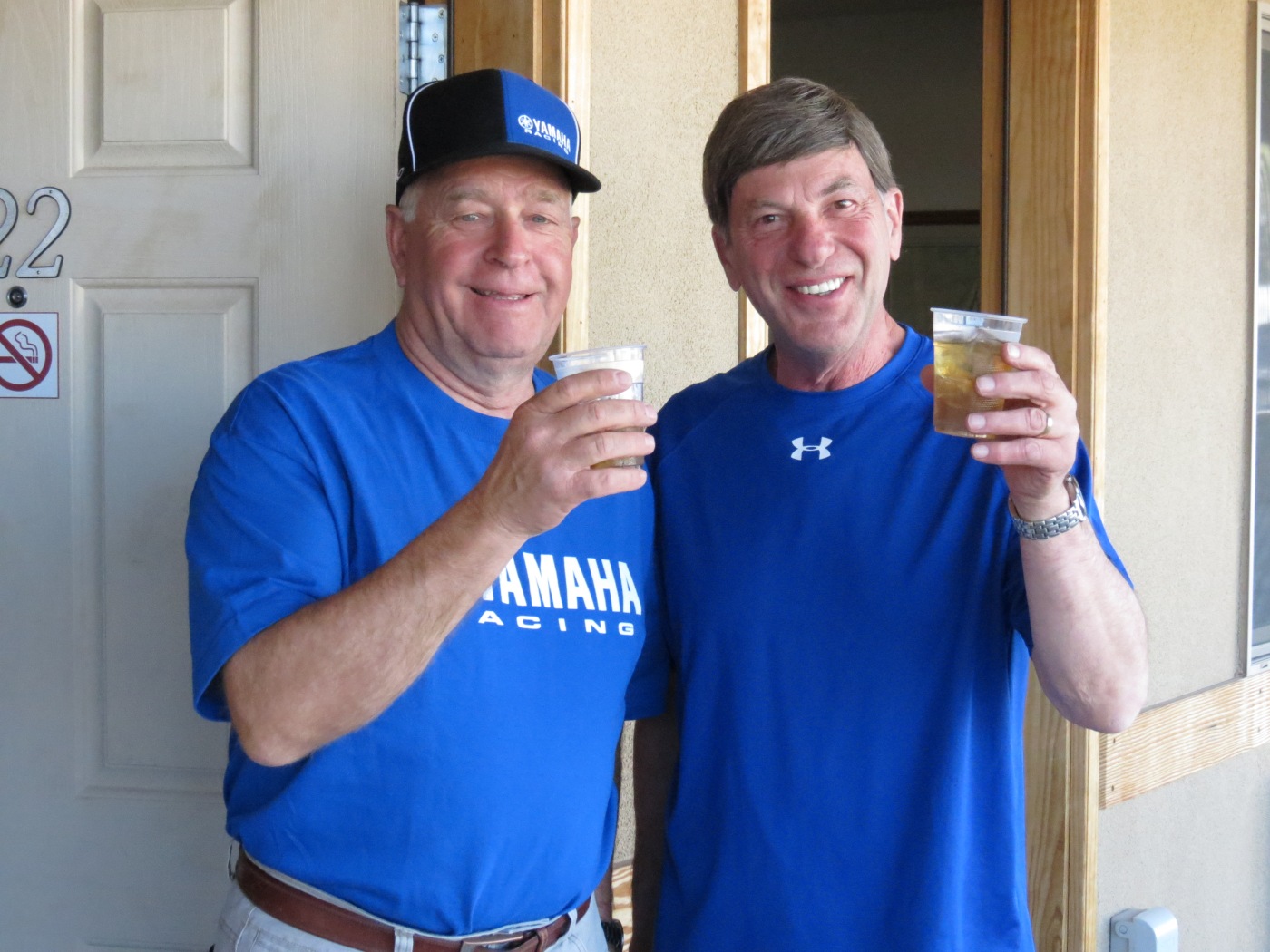 Today was strange. Long periods of time riding the best motorcycle roads you can imagine, punctuated by peculiar events and places.

We started out in Lordsburg, New Mexico bound for Silver City. I was excited to visit the latter, not only because it features prominently in one of my family’s favorite movies (“Rat Race”), but also for its reputation for being pretty cool.

Things got odd quickly. First, the restaurant we picked on Yelp and navigated to via Apple Maps turned out to be a house down a long dirt road (not fun on road bikes). The next restaurant we chose was on main street and looked promising. 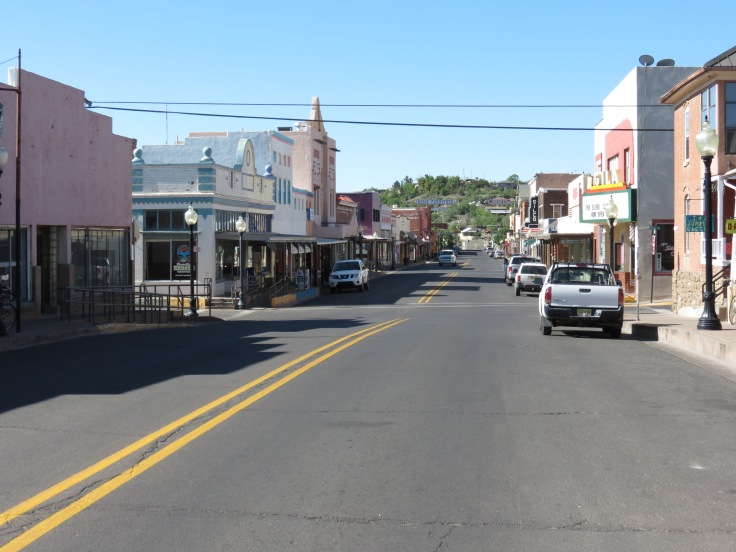 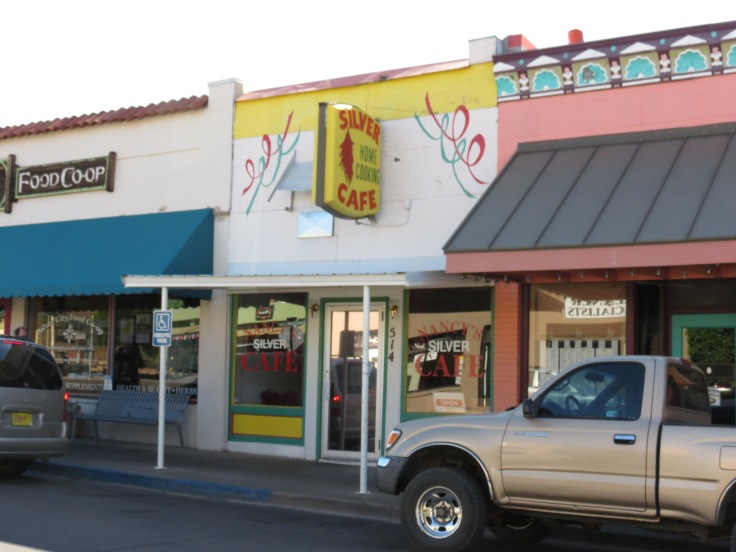 Nancy’s Silver Café had all the looks of a hole-in-the-wall with great food. It’s halfway there.

This restaurant was disappointing, but breakfast allowed me time to look up where “Rat Race” scenes were filmed. As it turns out, they were shot in Ely, Nevada, which stood in for Silver City, meaning my plan to take photos in front of the train station from the movie were dashed.

All that dissipated quickly, though, as we hit the road and spent the next few hours riding some of the best-rated motorcycle roads in New Mexico. We first rode north on highway 15 towards Gila Hot Springs (which would sound better as “Hot Gila Springs” but what’s done is done) and then swept down highway 152 towards Hillsboro.

Highway 15. New Mexico vistas aren’t as striking as those in Arizona but the roads are twisty, empty and blessed with great weather. 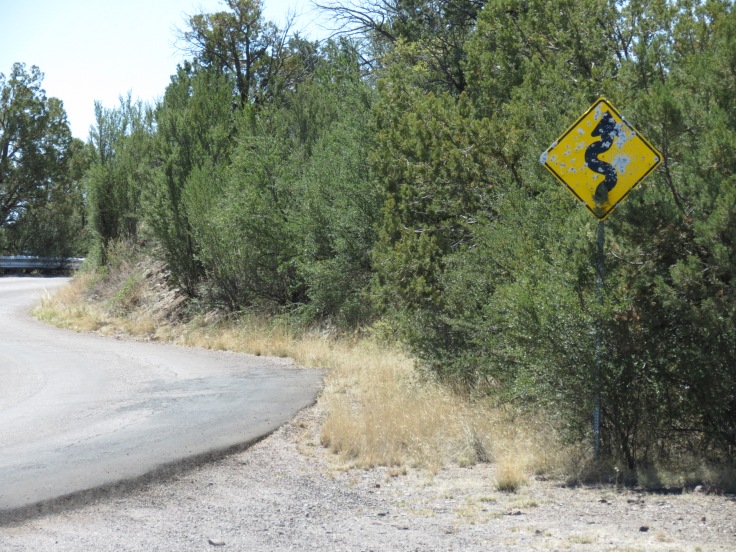 Our favorite type of road sign, and there were many of these, although none as frequently targeted.

Highway 152, looking west towards Silver City. It’s like this for 34 miles.

On both roads, we saw very few cars and were almost never slowed by traffic. Generally, New Mexico roads are in worse shape than surrounding states but never bad enough to be a problem.

During one of our stops, Dale noted that his front tire didn’t feel very stable. It was worn and slightly over-pressurized, so we took a few pounds of air out and he said that helped. That was not the end of the saga [Editor’s note: that last sentence is a literary device called, “foreshadowing.”]

Dale exhibits no stress or wear even though his bike’s front tire is showing both.

Clive laughs at Dale’s trouble, thankful that his own bike has no issues. Our family has a long history of laughing at others’ mishaps, provided they’re not too serious. Right, mom?

We rode back through Silver City after enjoying the roads around it and then turned north towards a little town called Quemado, where I’m writing this. On Butler Motorcycle Maps, this entire route is highlighted – meaning it’s a great road to ride on a bike. It was 150 miles of wonderful riding – long, sweeping corners, beautiful vistas in every direction, mostly good roads and perfect temperatures.

Again, we saw almost no traffic in either direction. We went for 20 minutes and more without seeing other vehicles and just leaned into turns and let the bikes “stretch their legs” on the straightaways. In fact, it was so good that I elected not to stop the entire route; I was just having too much fun. Thus, I have relatively few pictures from the road but I can’t apologize…the road was irresistible.

I did run into one small issue. Actually, I ran into two small issues at the same time – birds. Inexplicably, two birds dived down from the left, swooped in front of my bike and I ran into them at 65 miles per hour, creating an instant and sudden explosion of feathers and other bird detritus. Both Clive and Dale (who were following me) saw the catastrophic and total avian destruction and were almost as startled as I was – though none of us were as shocked as the birds. Fortunately, their surprise didn’t last very long.

I feel awful about this, but it was truly unavoidable. Hopefully over the next millennium, natural selection will result in birds who avoid motorcycles, assuming the latter still exist. And the former, I suppose, given how man seems intent on planetary destruction in one form or another.

I shook this off and we rode on. Only a few miles later, a large, wild turkey suddenly strutted across the road, left to right, and I managed to miss it by a few inches. Dale told me it gave him a dirty look when he rode by.

I had called ahead to the Largo Café & Motel – the only place to stay in Quemodo – and was told that not only did they have vacancy but that not one person was registered for the night. Yelp even gave a high rating to the café. So, we pulled in and in some ways the place exceeds expectations and in others, not so much.

It’s adequate as a hotel – for example, I’m using my phone for Internet since the WiFi is barely useable – but the café was a great surprise. 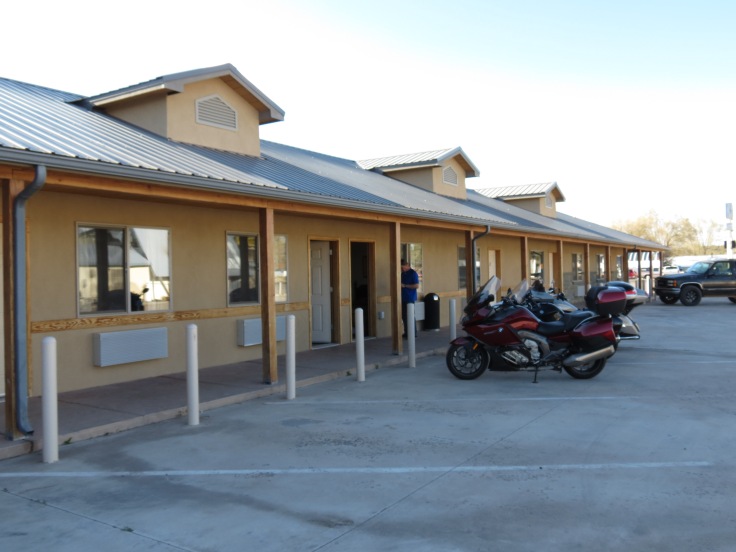 The Largo Motel is clean, neat and very dated. We all agree we have stayed in worse, but many more times in better.

Dinner was superb. Clive enjoyed a green chile cheeseburger, Dale loved his pork chops and I indulged in a delicious hamburger steak. We also ordered the green & red chili French fries – a tasty but massive dish we barely touched. [Editor’s note: Penny, I hardly had any fries at all. I promise!]

About 10 buzzards circled as we ate dinner and then perched on these trees, as though waiting for us to emerge. It was a very strange day for birds.

Hooded birds wait to gather round their next dinner guest.

There’s little to do in Quemado, but we decided to walk to the Country Store to check out the merchandise there, which turned out to be…eclectic. Along the way, we passed an abandoned motel (the Largo now has no competition) and some other reminders of days gone by.

The pay phone is dead, the motel is abandoned and the blank marquee is a sign of the times.

And then we walked into the Country Store and things got stranger.

How could anyone shoot a bear wearing a hat and overalls? Also, what’s with the little dude on the left holding the knives?

In Quemado, Antlers are the new black. Stephen King should visit here to find out what creepy really means.

If you’ve read this far, you probably wonder what all of this has to do with the title of this blog. Well, it turns out that Dale’s front tire has decided that 2018 is a Goodyear to die.

You definitely never, ever want to see the cords of your tire and plenty of them are showing on Dale’s bike.

Since Dale’s bike needs a new tire, that makes tomorrow his “re-tire-ment.” As a result, we are making a sudden change of plans and taking a long, slow and careful ride to Gallup, NM in the morning – 104 miles of delicate progress with frequent stops so we can check to see how the tire is holding up. There’s a motorcycle shop there that has a used tire for the low, low price of $20 that is almost the right size (same diameter; a little taller profile). That shop doesn’t have time to mount the tire since they have a swap meet tomorrow, but a nearby shop has offered to do it instead.

So, it’s been a fascinating day. The “bad” stuff has mostly just been interesting (although fatal to two innocent but misguided birds) and the motorcycling has been off-the-charts fun. It hasn’t dampened our spirits one bit and – assuming we make it to Gallup and get the tire swapped – it’s mostly just a great memory and story to share.

Clive and Dale have “cocktail hour” every evening at the hotel. Tonight was no exception, although we did have a moment of silence for two birds. The drink of choice? Wild Turkey, of course.

I look forward to updating you tomorrow night – it will be Clive and Dale’s last day on the road this trip while I will head from Del Norte to Longmont on Sunday morning. Thanks for virtually riding along.

The sun sets on Quemado, New Mexico. The zombies should be here soon.