When we awoke in Safford, AZ this morning, we had no idea we would help to close off a major chapter in southwestern US history – let alone participate unwittingly in a spiritual event 130 years in the making.

If Clive and Dale rode Victory bikes like I do, that sign in the background could have been about us. Alas.

These events began to unfold last night as I was writing yesterday’s blog. My sister (and Clive’s) Rosalind strongly urged us to visit Chiricahua National Monument in southeastern Arizona. She was insistent that we’d love it, that it was worth the ride and that she could nearly feel the spirits when she and her husband Bob visited there.

I wasn’t familiar with Chiricahua National Monument, but this area was Geronimo’s home (he was a Chiricahua Apache) and close to where he was captured. The story of Geronimo is very tragic – his wife, mother and three children were killed in a raid by the Mexican army while most of the warriors were away.

The United States unilaterally cancelled a treaty Geronimo’s predecessor Cochise had negotiated preserving their lands. And when he finally surrendered in 1886, he was treated like a prisoner of war, relocated to Florida where he was shown off as a “bloodthirsty savage” to tourists and was finally moved to Ft. Sill, Oklahoma, where he died and was buried.

He was never allowed to return to beloved Chiricahua home. It’s easy to see why he missed it.

Dale is very happy to be at Chiricahua — he is smiling so wide his eyes are squeezed shut. Clive adopts a “we’ll see, we just got here” expression.

I don’t remember what these formations are called, but there are many thousands of them and they’re very tall. And they’re not lava chimneys; they are left over when the softer material around them erodes. The literally used to be part of the mountain on which they stand. 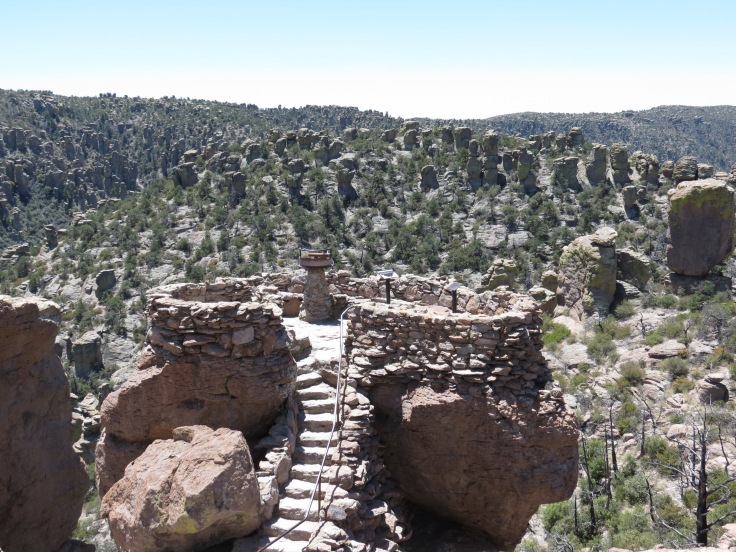 This viewing deck at Chiricahua National Monument was most likely constructed by the Civilian Conservation Corps in the 1930’s. We learned in the visitor’s center that more than 3.3M young men took part in this program and among their many projects was building the road, trails and various paths around this monument.

This particular formation is among the thinnest for its height. I wish I knew that feeling. 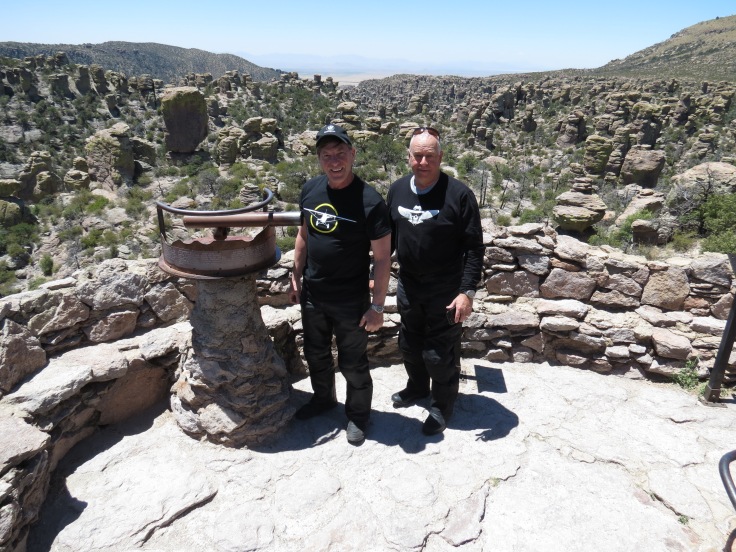 For this photo, I asked Dale and Clive to pose with goofy looks. Not really; they did this on their own.

It’s hard to tell from photos, but these formations are large and they go on for miles. Not unlike Clive and me on a motorcycle ride.

Dale and I took turns standing between these rocks for pictures. Wouldn’t you? 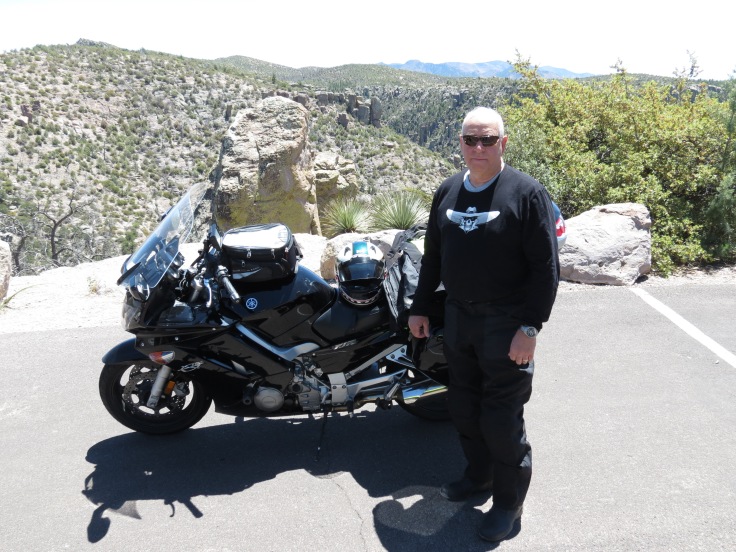 Clive next to his steed. 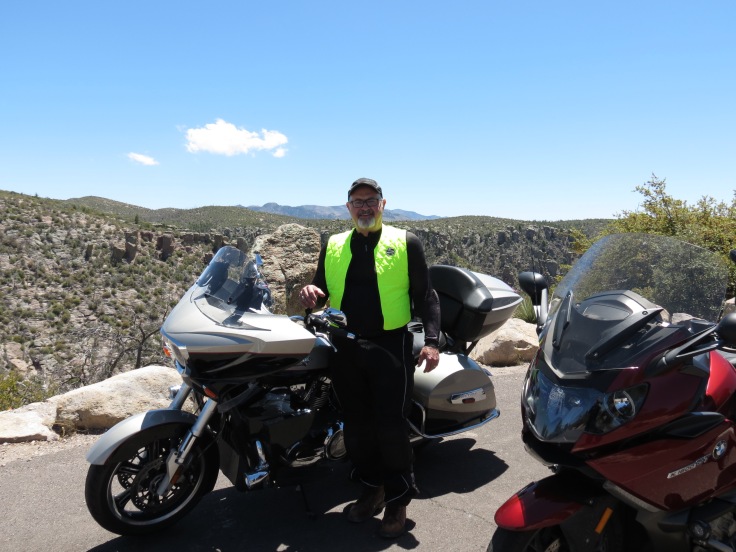 I like being the official trip photographer because it keeps me out of most of the photos. But here’s one for my fans.

Something strange happened at Chiricahua National Monument: Dale began to stop acting strange. The delusional behavior we experienced earlier in the week – centered around his alleged “invisible friend Herbie” began to dissipate. I first noticed this as we prepared to leave; I’ll explain what caused this transformation at the end of this blog entry. It’s an amazing story…

We really enjoyed Chiricahua. In fact, it was so great that we decided to follow Roz’s next suggestion destination, the mining town of Bisbee, AZ. 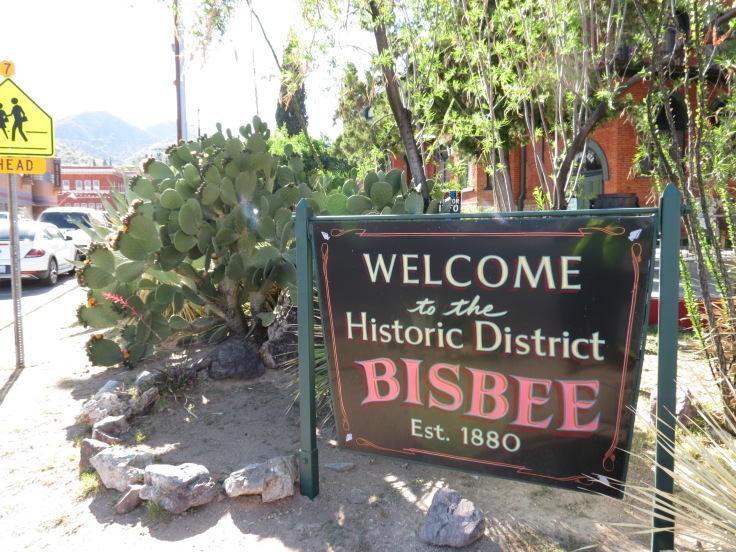 Not sure why they have an “Historic District” in Bisbee. The whole town seems historic. 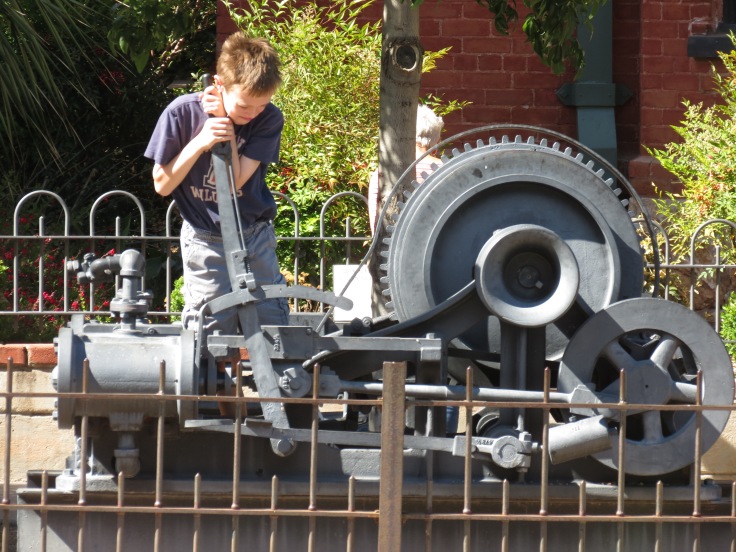 One disappointing “historic” aspect that Bisbee has retained for more than a century is a reliance on child labor for mining work.

We decided to eat at a restaurant Rosalind recommended (Bisbee’s Table) and as I was taking a group selfie, a local man literally took my phone from my hand. He said, “Since this picture is in Bisbee, it needs to be weird,” and tilted the camera like this intentionally. True story.

The interior of the restaurant was really cool, nicely incorporating elements of the past into a contemporary establishment. 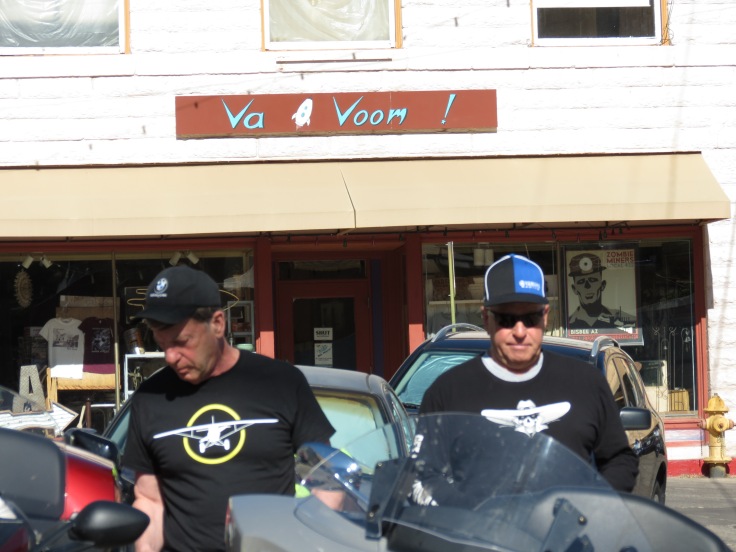 As we prepared to depart Bisbee, I couldn’t resist taking this picture of my riding buddies, whom I should collectively call, “Va Voom!” from now on.

Prior to visiting Bisbee, I had checked the mileage from there to this evening’s destination: Silver City, NM. I informed Va Voom that it was only 88 miles, so we lingered awhile in Bisbee. Upon getting on our bikes, I checked again and found I was off by nearly 90 miles. That meant it was too far to ride this evening, so we wound up in Lordsburg, New Mexico instead. Sorry, gents — but I”m looking forward to riding to Silver City for breakfast tomorrow. One of my family’s favorite movies (“Rat Race”) ends there.

Right as we left town, Dale suddenly pulled over because he had a bug in his helmet. Not the type from the NSA – the kind with six legs.

Dale preparing to remount after getting the bug out of his helmet. Conveniently for him, BMW riders feel entitled to park on sidewalks.

Along the way, fate brought us across something very interesting – the site where Geronimo surrendered for the third and last time.

Dale jumped up onto the pedestal of this monument and even took a picture of the plaque.

Dale was particularly fascinated by this memorial. He insisted we stop and then spent quite a bit of time studying it – all of it out of character, but since he seemed now otherwise “cured,” I didn’t really give it a second thought.

It wasn’t until I imported the photos from today’s trip that everything suddenly connected in my mind – Dales behavior, his “invisible friend, Herbie,” the spiritual connection we felt to Chiricahua and his demonstrated fascination with the monument. “Herbie” wasn’t an invisible friend – he was the ghost of Geronimo!

Look carefully on the right and you will see, at last, “Herbie,” who is really Geronimo. This is the first picture I’ve ever taken that was photo-bombed by a spirit. Hint: If you’re viewing this on Facebook on a mobile device, click the menu in the top right (three dots) to open up the blog in a web browser so you can zoom in on pictures.

I went cold when I saw this photo. But as I researched Geronimo’s history, everything became so clear. First, Geronimo was never a chief – he was a medicine man. There were Apache legends about his ability to heal people. Who would he want to escort him back to his homeland – a trip denied him while he was alive? A man like Dale, who’s a doctor, too!

And Geronimo knows nothing of modern transportation. Airplanes would be a mystery and cars are likely beyond his spirit’s comprehension. But a motorcycle is the closest thing to a horse he’d see on the roads.

I think the spirit of Geronimo has been searching for his homeland and then he came across Dale, a “medicine man” like him and heard something of his motorcycle journey to Arizona. Fearing he might still be wanted by the US Army, he adopted the “Herbie” persona – probably derived from President Herbert Hoover, since Geronimo was known to have great respect for Presidents.

Since my sister Roz visited Chiricahua not long ago, the other Apache spirits there most likely connected with her subconscious to have her urge us to visit the monument. They knew our connection to Dale and so the entire Apache nation in the afterlife conspired to help us return Geronimo home after all these years.

When you think about it, it makes perfect sense, obviously. Dale must have a strong connection to the spirit world himself. So strong that he sensed Herbie’s presence, which was quite real, of course, but it was a reality Clive and I could not sense (we have not historically enjoyed a strong connection to the spirit world; both of us received low marks on the subject in school).

And so we say farewell to Herbie and Godspeed to Geronimo. We’re very happy to have played a role in returning his spirit to his homeland and I’m glad the readers of this blog were able to follow along. We’re especially glad to have the old Dale back again but we will certainly miss all of the comments and questions about Herbie – which far outnumbered any concerns about Dale’s health, curiously.

I hope something else offbeat and interesting emerges during this adventure so I can report it to my readers. Somehow, I think it will.

4 thoughts on “2018 Tour Day 6: Geronimo Finally Returns to Arizona and Farewell to Herbie”