This year’s Grand Motorcycle Tour (my third consecutive) began in Longmont, CO for me. Since the grand part of all three tours has been in the western US (this year and last) or partially in Canada (the first year), this is a much more convenient starting point. However, I needed to pick up some friends along the way – two of whom I knew about in advance as well as two surprise riders.

I left our home in Longmont before 6AM this morning, gassed up and headed through the mountains for Del Norte, CO — my hometown, to the degree I have one.

Okay, not the entire way. During the first 250 mile leg of my journey, the temperature actually soared into the 40’s after a while and then reached a comfortable mid-60’s for the last 50 miles or so.

Once in Del Norte, I met up with Dale Berkbigler – repeat visitors to this blog will recall he was on last year’s trip – and also Bill Dunn. I knew Dale was coming along but it was a surprise to learn that Bill was joining us.

I’ve known Bill for about 40 years but haven’t seen him for 30. He hasn’t changed any more than I have in three decades. Bill’s an attorney, meaning we now have group legal representation to accompany our group physician (Dale).

We again met at Dale’s hangar and he again promised to take me flying sometime and I again said I looked forward to it while not believing he meant it (again). Like Dale, Bill rides a BMW but, also like Dale, somehow manages to be a nice guy anyway.

We mounted up and rode west to Pagosa Springs, CO, to pick up Bob Steffens, our second surprise rider. Bob is a large animal veterinarian and rides a Honda Gold Wing.

It’s really great to have these professionals on the trip with us. I know I personally feel safer having a doctor on the trip in case I get hurt and I’m sure my brother Clive feels the same way about Bob.

Speaking of Clive, we rode west from Pagosa Springs to Durango, CO, where my brother and his wife Gwen recently relocated. They have an absolutely gorgeous home in the mountains outside of town and I should have thought to take more pictures of the views they enjoy but you’ll have to settle for this pic of us having lunch inside along with a shot of our bikes outside their home. Gwen made a phenomenal white bean and chicken chili along with cheese quesadillas and we all ate too much.

Outside Clive and Gwen’s house. BMW riders always position their bikes closest to the camera. We get it – you’re super discerning and so you ride a BMW.

We then rode west again to a very out-of-the-way and truly hard-to-find National Monument called Hovenweep. Hovenweep is a large group of Indian ruins scattered along 20 miles of rough, desert canyons. It’s desolate, beautiful and frankly a little haunting. The ruins date back to AD 1200 to 1300 and the monument spans the Colorado Utah border. 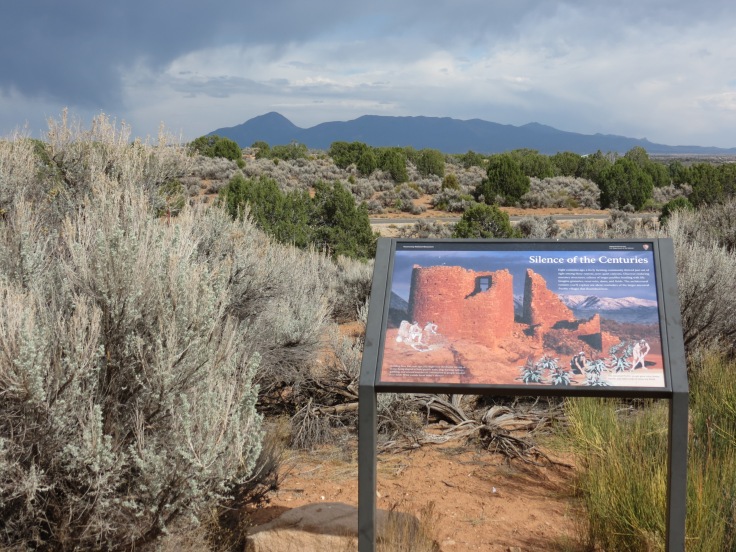 Three walking paths of various lengths and of course, we took the shortest one (a mere 900 feet) to gaze upon a cluster of ruins built in a canyon. It’s amazing to see what these primitive people did with such basic tools. It must have been back-breaking labor in the desert heat. No wonder they all moved somewhere else: no air conditioning. 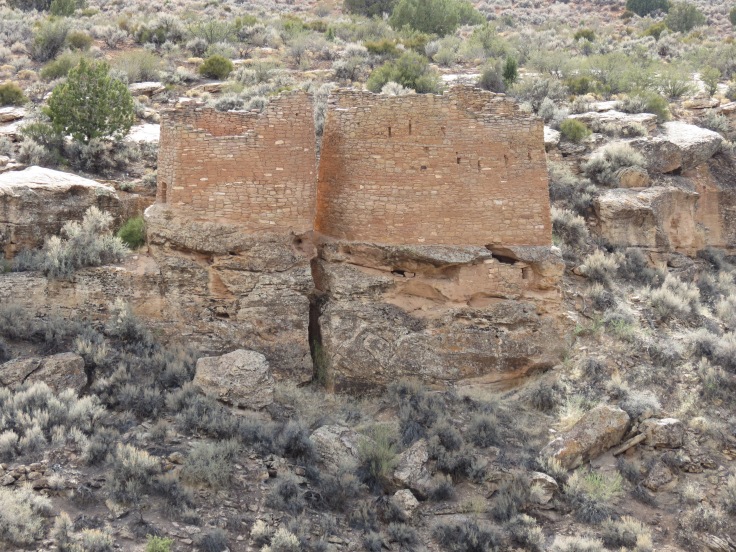 Of course, no matter how grand the historical achievement of ancient peoples or how spectacular the terrain, any backdrop can be improved by putting our group of riders in front of it.

I have to say that is was particularly gratifying for me to visit these ruins with this year’s riding group since I was able to thank them, personally, for building them.

As we walked towards the bikes to depart Hovenweep, I reflected that Bob Steffens really struck me as an extremely nice man. I’d heard he is a true gentleman. What I had not heard was that he has a sketchy side – as witnessed by him rifling through this motorcycle. It’s not his. On the other hand, it’s not mine, either, so I didn’t really care. I suppose he might have been looking for large animals requiring veterinarying.

After this adventure, we next rode through the spectacular deserts to our stopping point for the day, Mexican Hat, UT.

Clive and I decided to go on a little photography expedition to capture some shots as the sun set. Mexican Hat is named after the rock in the left side of this picture by someone who didn’t need much imagination: 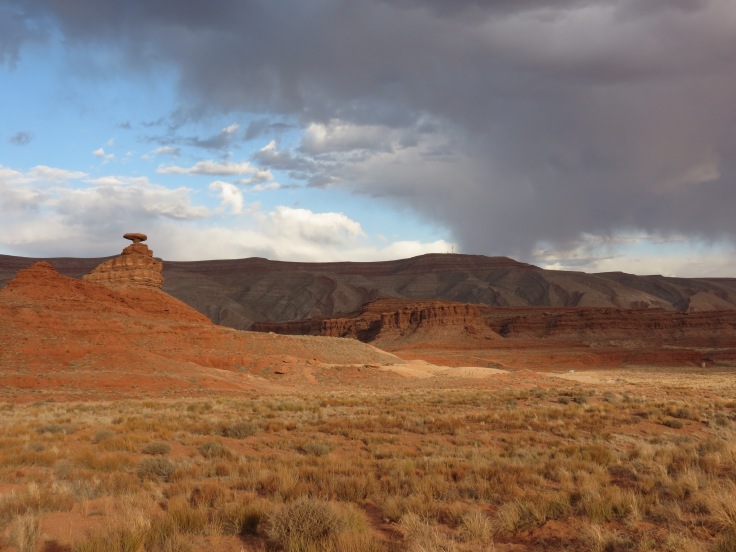 Mexican Hat the town is named after Mexican Hat, the rock.

I should point out that I have not manipulated any of the images in today’s blog. I only cropped a single shot and the lighting and colors are exactly as they came out of the camera. Dale really is that pale.

Once again, of course, no spectacular panorama is complete without us in front of it, so – like last year – I used my helmet as a tripod and shot this picture of Clive and me and I have to admit I like how it turned out: 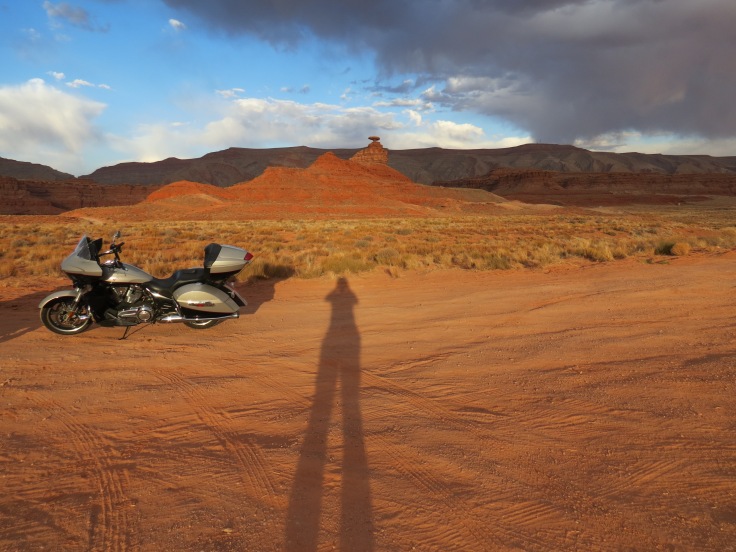 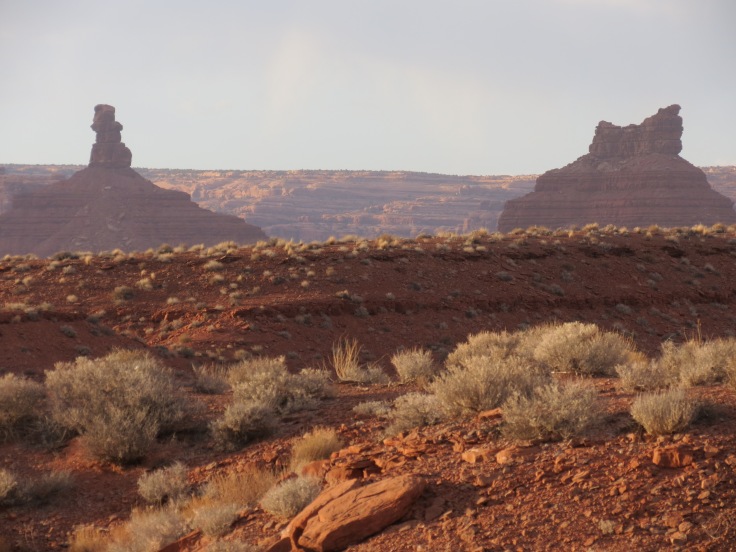 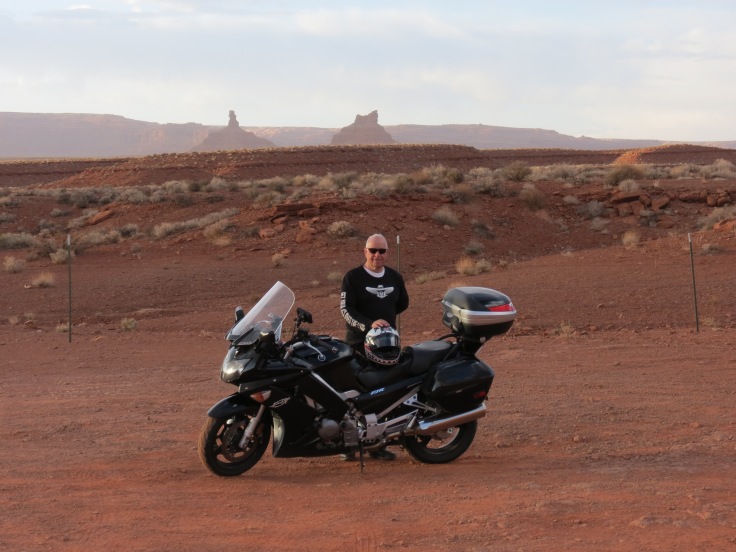 The light was particularly flattering so I thought it was a perfect time to take a picture of Clive.

As it began to get dark, we headed back to our motel. As Clive pulled in, I stopped on the hill above to take a picture of our evening dwelling.

You can see our motel on the right. It’s a dramatic setting but ride down to that driveway was rocky.

At last, after more than 550 miles and 13 hours after I left home, I pulled into the hotel for the night. It’s a very interesting place – it’s in a gorgeous setting, it’s loaded with character, it’s run by a mostly-surly staff and it’s a dump inside. So we sat outside and talked and I took some last photos before we headed to dinner. Notably, this motel also has the slowest internet I’ve used since dial-up, meaning it took me half an hour to write this blog and two hours to upload the pictures and copy to WordPress.

Although the architecture fits the terrain, the interior of the motel is remarkably similar to what we saw in the ruins at Hovenweep. 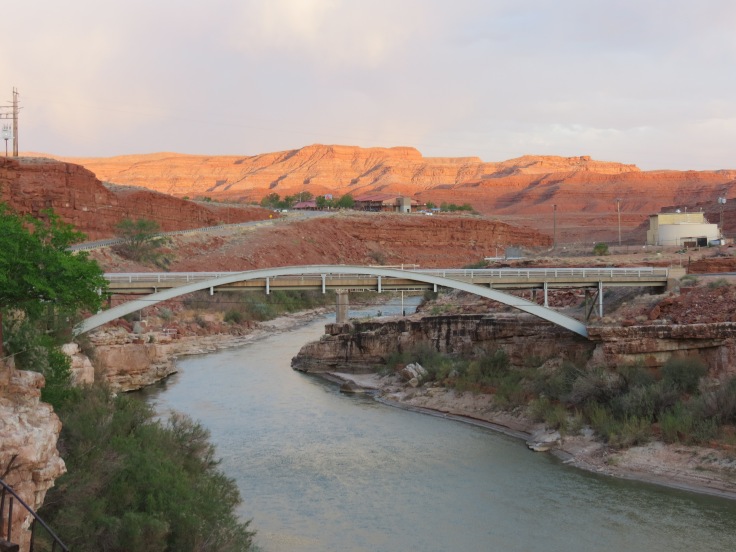 This is the view from where our bikes are parked. 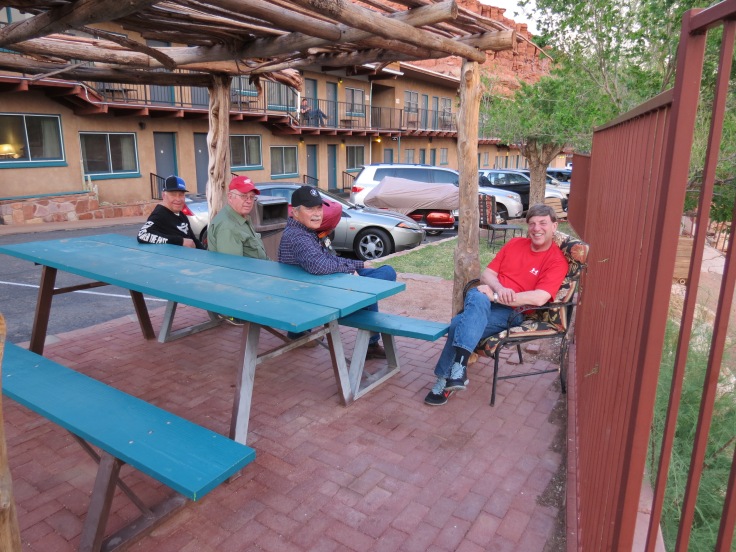 L to R: Clive, Bob, Bill and Dale. Dale ran out and grabbed the comfortable chair before anyone else could.

So, for those of you who complained last year that some of my blog entries didn’t have enough photos in them – I hope you’re satisfied and thanks for the implied insult on my writing.

Kidding aside, the friendship and scenery today were both off-the-charts spectacular. I can’t imagine having more fun on a motorcycle or enjoying more beautiful examples of the breathtaking topography of the American Southwest.

I can’t wait to experience the next eight days of this adventure – thanks for sharing them with us. And a special thanks to my riding buddies who stop so I can take pictures, pose for my camera and then endure my steady stream of cheap shots. I’m grateful they don’t run me off the road. Of course, the trip ain’t over yet.