I’ve heard a couple of grumbles about my light-hearted shots at my riding companions, so I’ll start this post by stating that the word “dinosaurs” in the title does NOT refer to Clive and Dale. Now, I’m not saying it COULDN’T but it DOESN’T.  We saw actual, honest-to-god, best-in-the-world dinosaur bones today and it’s fascinating and I’ll get to it.

But let’s start in Pocatello, where we decided to leave at 7:30 and actually left at 8. Dale is always the first one ready and I’m usually next — just barely before Clive is set to go, which is my goal. Dale spent considerable time on this trip sitting on his bike, geared up, engine idling, watching my brother and I snap our jackets closed or jump off to close a latch on the luggage or (in my case) remove the key from the trunk so I can use it to start the bike.

Full disclosure: Not once but TWICE on this trip, I left the key to my bike in the trunk only to be rescued by (in one case) a hotel employee and (the other time) a guest who found it and turned it in.

I just checked and it’s on the dresser, by the way.

Anyway, we left Pocatello right on time (30 mins late) and hit the Interstate southbound briefly before exiting onto Highway 30, which is the old “Oregon Trail” (now paved). Given my commitment to taking more pictures today, it wasn’t long before I pulled over to take a scenic shot. Here it is:

Highway 30 was a lot of fun to ride and — once again — we saw no sign of law enforcement. Not that we were speeding.

I tried out a new navigation app on my iphone and it was the best of a sorry lot so far. The problem with nav apps is that they are all designed to get you from point A to point B as efficiently as possible. As recreational motorcyclists, we want to go the scenic, curvy, away-from-traffic route. It’s hard to find an app that does this well AND is easy to use and see while you’re riding. “InRoute” has some glitches but it outshone its awful competitors by a wide margin. It’s the thinnest kid at fat camp.

We eventually crossed into Wyoming (state slogan: “Forever West” — as if bordering states were relocated east) and paralleled the Green River (a river that is, in fact, green)  for several miles before reaching Green River (a town which is mostly brown). Although we generally avoided chain restaurants during this trip, in Green River we lunched at the Grand Daddy of All Chains, McDonald’s.

After restarting our hearts (and bikes), we rode south on highway 530 until we crossed back into Utah — the same state we rode on our first day of this adventure (it’s big). We soon reached the “Flaming Gorge,” so named by John Wesley Powell (famous explorer) in 1869. Although Powell was thinking of the spectacular red sandstone cliffs, apparently the guvmint thought he was referring to actual flames because they built a dam to stop the flow of the Green River and create a huge reservoir to put out the fire.

We rode down to the Visitors’ Center and dam. In the Visitors’ Center, they told us that in order to access the walkway where you can take pictures of the dam, you must pay for a “Guided Tour.” I told them that I only go on “Misguided Tours,” and they laughed, although I was seriously talking about this motorcycle trip in which I am generally leading, meaning we are often misguided. Bottom line: no dam pictures!

But we did take some shots around the reservoir: 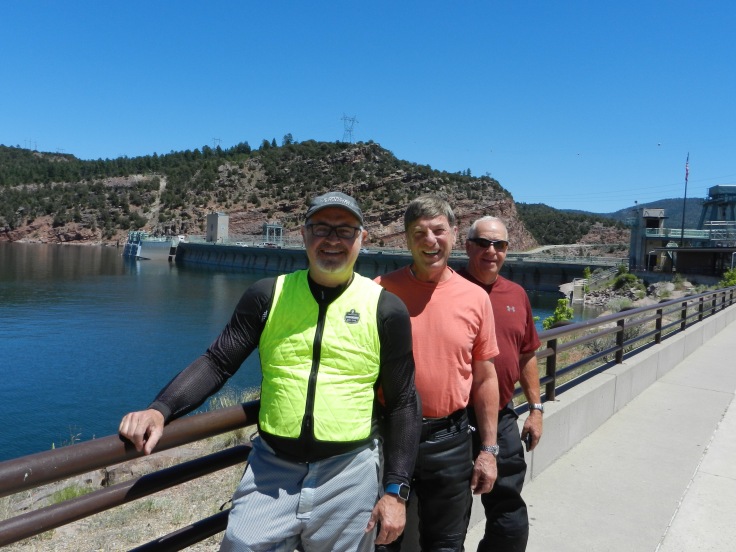 I am particularly proud of this shot, which may be the best candid photo I’ve ever taken of my brother:

Dale smiles all the time, so this one was easy:

We also witnessed this scene. I’m calling this picture, “The Reluctant Dog,” because this poor pooch REALLY did not want to go into the water. Or maybe he’s afraid of tennis balls. 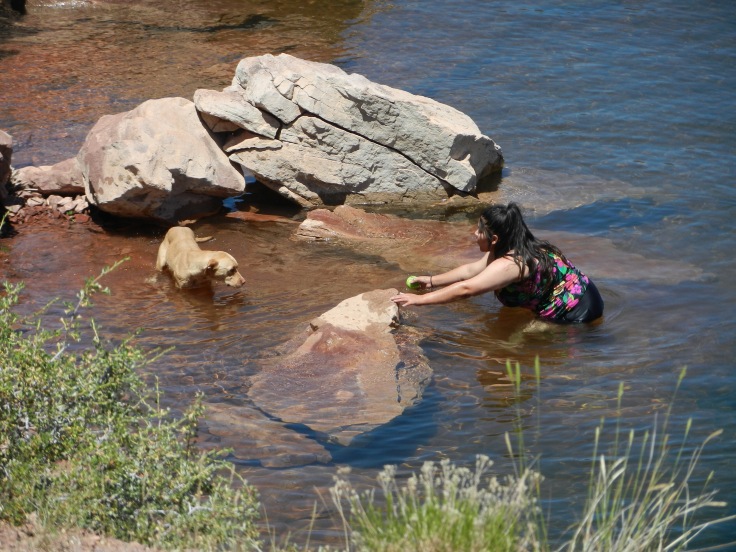 But the big finish to our trip was ahead of us: Dinosuar National Monument, a unique and amazing place. I’m embarrassed to admit that I lived in Colorado for 23 years of my life and never made the effort to visit this historic and awesome destination. I’m even more embarrassed for Dale and Clive, who have lived here much, much longer and have never visited either.

We parked at the Visitors’ Center and hopped on a short bus (appropriately) for the ride to the Quarry Exhibit Hall: 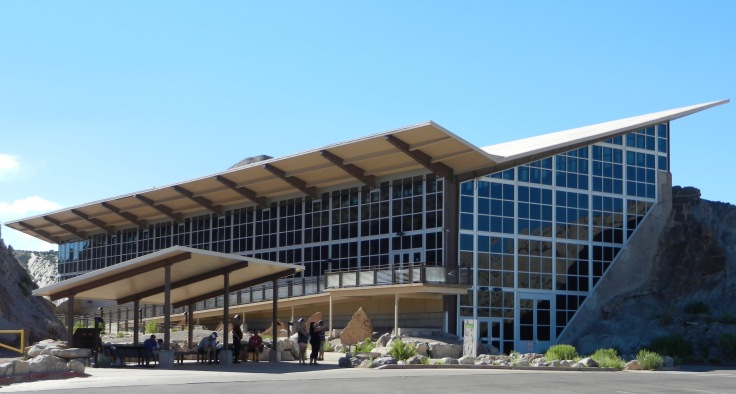 See that rock on the right? It is exposed on the interior of the building and it’s chock full o’ bones.

Here’s the short version of the story:

In July, 1909, a paleontologist named Earl Douglass (no relation) was instructed by his employer — Carnegie Museum in Pittsburgh — to look for dinosaur bones east of Vernal, Utah. By August 16th, he hadn’t found much and he wrote in his diary that he “Felt rather discouraged.”  On August 17th, he changed his search area a bit and found “eight of the tail bones of an Apatosauros in exact position…it was a beautiful sight.” He spent the rest of his life in Utah, most of it running the dinosaur quarry at what soon became Dinosaur National Monument.

That rock wall used to be several times larger — it was excavated over the years and many full skeletons were removed and are on display across the US and a few other places as well. The current Quarry Exhibit Hall protects and displays a 150 foot wall still containing an estimated 1,500 dinosaur bones. Here’s what it looks like: 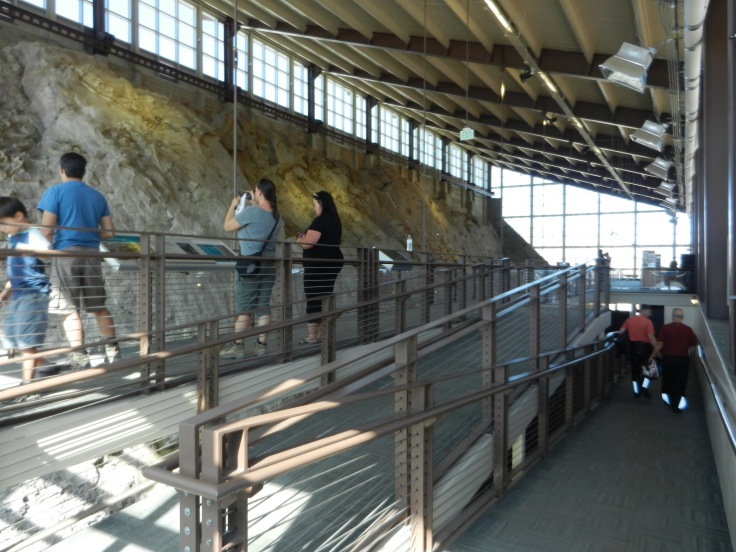 Note that it’s TWO levels — here, you see visitors looking at the upper portion while Dale and Clive (right) are walking down the ramp to the lower level. 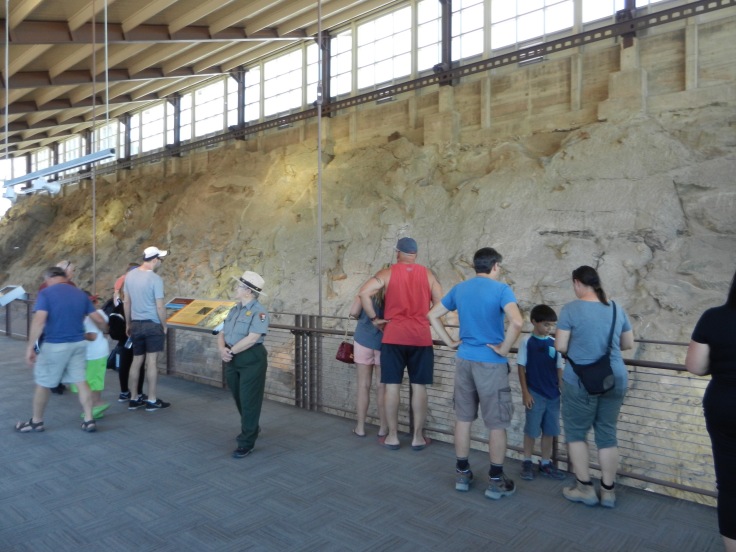 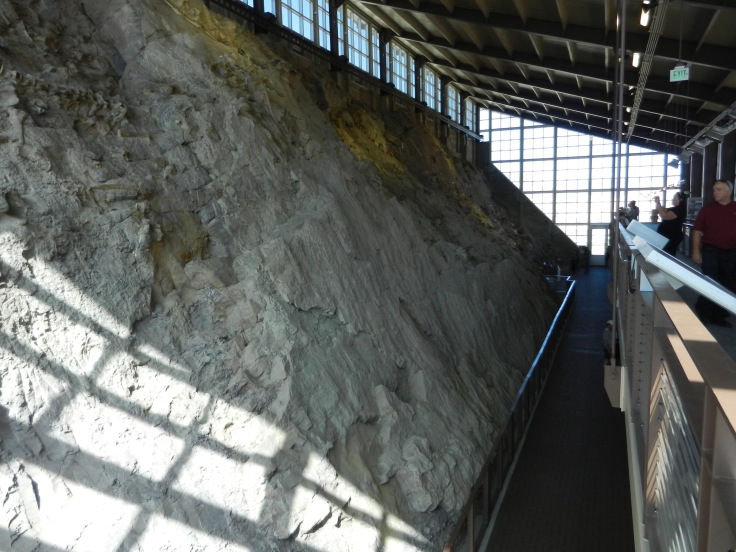 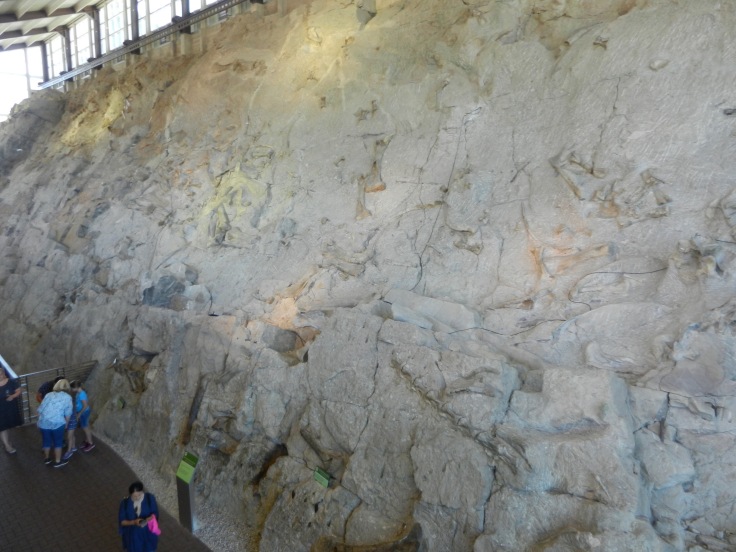 Here’s how the current wall compares to the original (before they started excavating. You can see why they call it “a quarry.”)

Now some detail shots and exhibits: 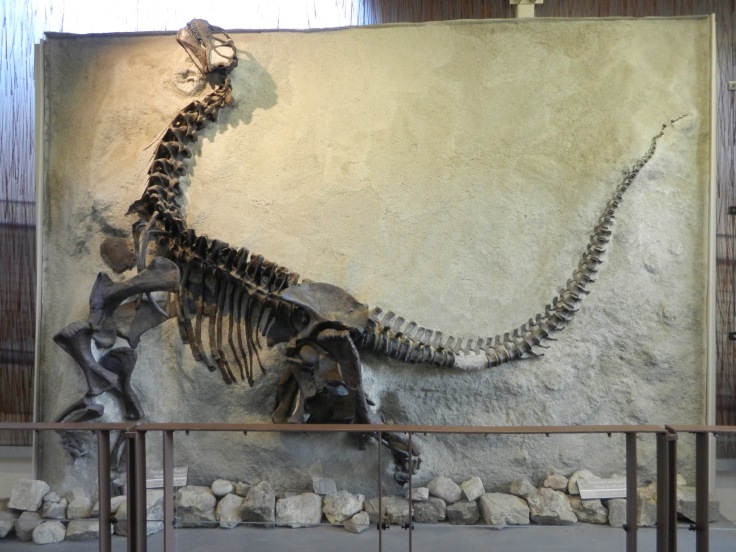 There’s a lot more to Dinosaur National Monument, including many artifacts from ancient civilizations and some amazing petroglyphs (which are carvings; the ancient cliff drawings I photographed at Capital Reef earlier in the trip are pictographs). But, it was time to go. We decided to take snapshots at one overlook in the park before hitting the road: 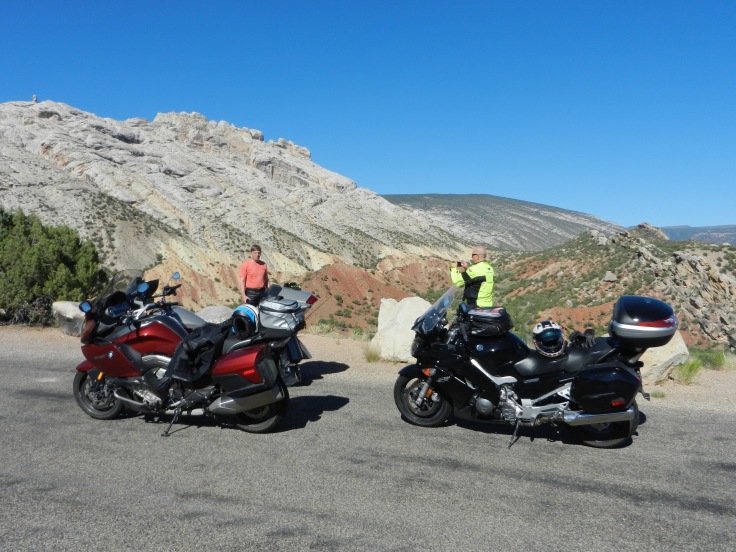 We rode Highway 139 south over Douglas Pass; it was a narrow, winding, rough and sometimes harrowing but wildly fun ride to I-70. Douglas Pass’ speed limit is only 25MPH for long stretches and that’s well-deserved. Clive called me before we reached the narrow part and warned me to watch for deer. As if they had been notified, two deer showed up in a corner, one jumping across my path about 20 feet in front of me. It wasn’t close because I was being careful. Thanks, Clive.

We are, at last, in Grand Junction and we enjoyed a great dinner at one of my favorite restaurants here, Bin 707.

Now the bikes are tucked in for the night and Clive and Dale have probably been slumbering for a long time. We’re meeting at 7:30 for breakfast and then, regretfully, splitting up as Dale heads for Del Norte, CO and Clive and I ride to Denver. I’ll get to spend some time with my son Blaine and see Gwen, Clive’s wife, too.

I’ll add one more blog post about this remarkable motorcycle adventure soon and upload all of the photos in full resolution to flickr. But for now, I need to get some rest and prepare for one more day on two wheels before flying back to Atlanta, my wife, my job and my life.

Thank you from the bottom of my heart for reading this and (as we are told at virtually every stop):

Stay safe out there!