We woke up in Utah this morning, the most religious of states in America. Utah is relatively dry in more ways than one — my co-travelers insisted we stop at a liquor store in Colorado prior to entering the Beehive State.

We took off from our hotel and rode into the town of Capitol Reef — which I slighted in last night’s post. It’s actually a fascinating little village in southern Utah and it’s blessed with a fantastic little restaurant, The Capitol Reef Inn & Cafe, which doesn’t look like much on the outside but boasts an appealing interior and even more appealing food. 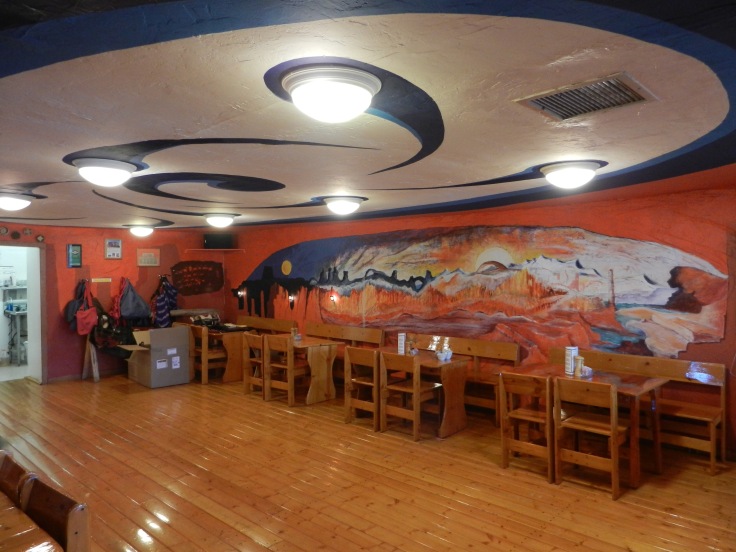 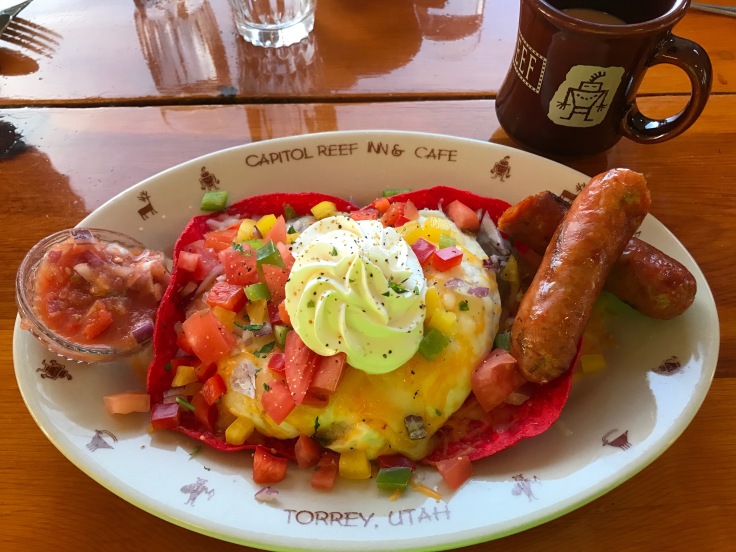 After breakfast, we remounted our iron steeds and I learned as we entered it that Capitol Reef is also the name of a national park. In addition to some mysterious pictographs (for example, why did Indians thousands of years ago draw four-fingered characters wearing helmets?) we also found a great place to park the bikes, climb a little hill and take a couple of snaps, including our first group selfie of the day. This time, I perched the camera on a little pile of rocks I built; I predict that in 1,000 years, some future archaeologists will wonder at the religious significance of this tiny shrine built by the foolish and superstitious people of our era. 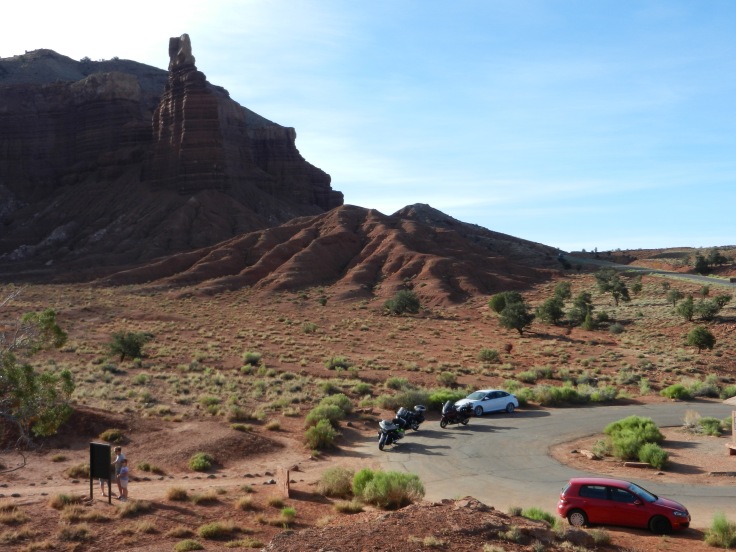 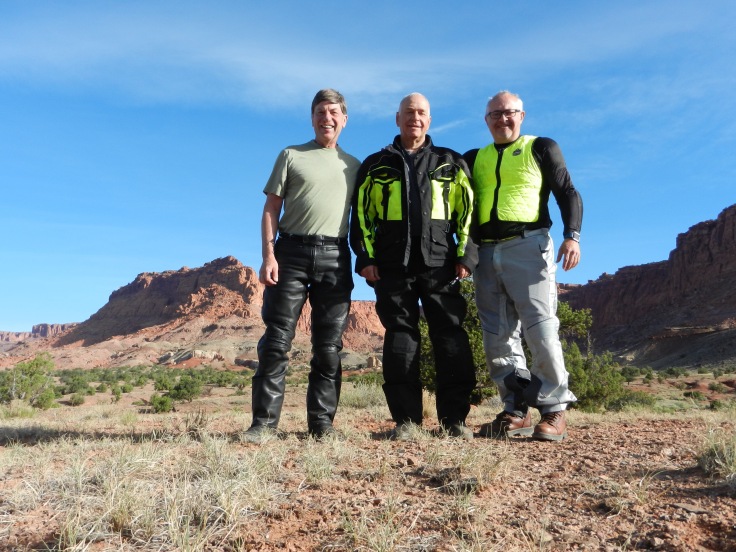 After departing Capitol Reef, we drove up a pass and pulled over again to a vastly different landscape. We met a couple of elderly brothers from Detroit and offered to take pictures of them in exchange for their services in snapping shots of us. 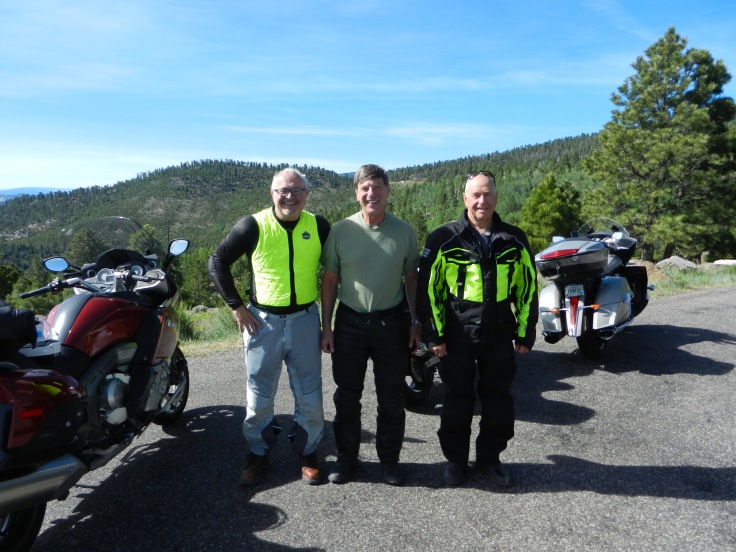 Later, we spotted a fascinating landscape by the side of the road and pulled over to see a gorgeous desert below us with a river running through it. If you look closely, you’ll see the greenery thriving thanks to what is really a small amount of water in what is paradoxically a gorgeous wasteland.

It then occurred to us that only one thing could possibly improve the beauty and grandeur of this scene, so we took another picture — with us in front of it. 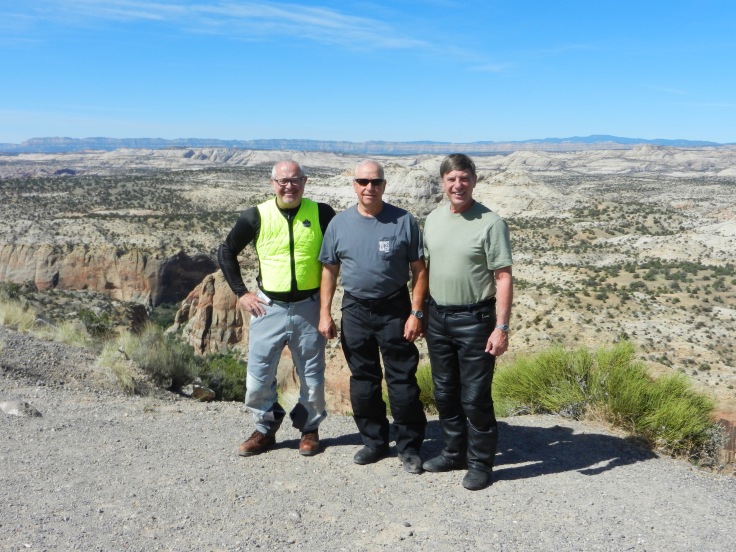 We then toured Bryce Canyon National Park — a favor to me as both Clive and Dale had seen it just last year.
The pictures will give you a sense of what the landscape is like but (you know what’s coming), you have to see it for real to “get” the breathtaking scope and scale of this unbelievable topography. It’s just stunning. I added a series of photographs below; in the last one, I zoomed in so you can see the people hiking on a trail to the bottom of this canyon. This is an 18x zoom and yet the people are still tiny little figures in the frame. 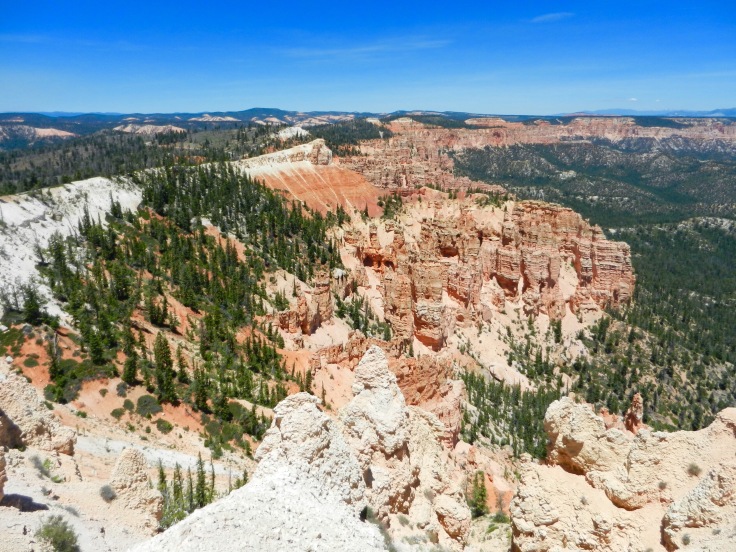 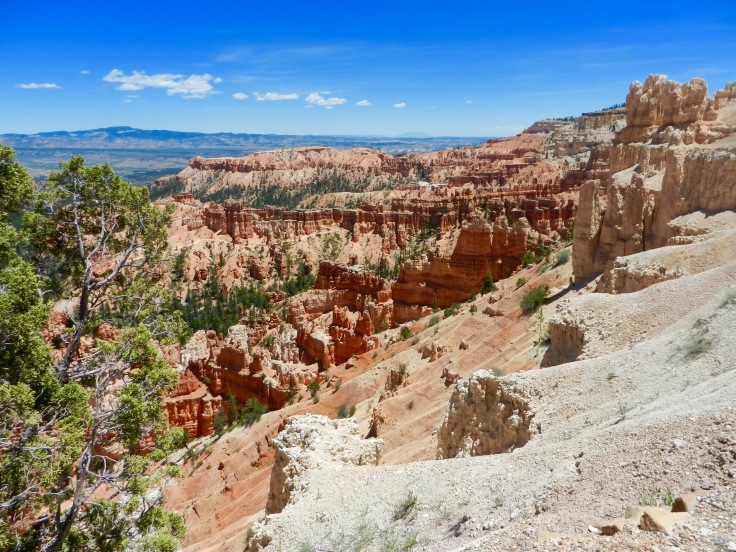 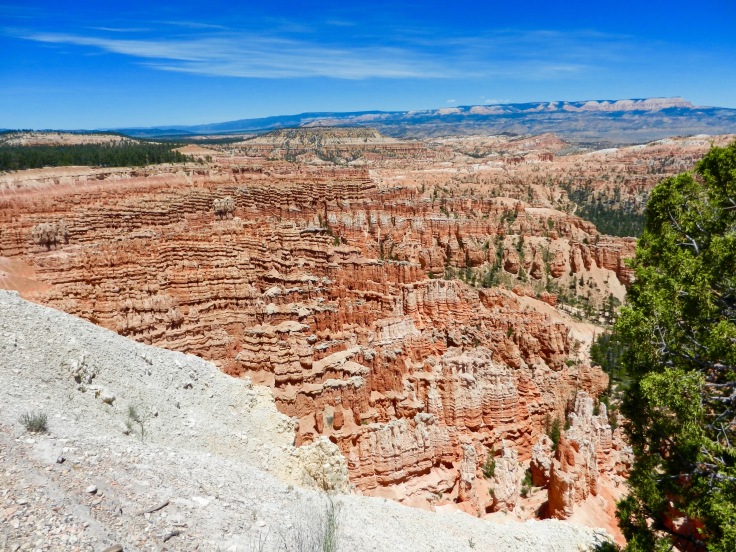 In the heat of the mid-afternoon, we left Utah and entered the land of sin — Nevada. We rode for a few hours across vast deserts, over a mountain pass and across an enormous plain ringed by mountains on three sides that reminded all of us of the San Luis Valley in Colorado, where we began our journey.
We ended today’s travels in Caliente (Spanish for “hot”), Nevada, where it was — thanks to a permanent municipal ordinance, I believe — exactly 100 degrees when we arrived. According to the menu in the “restaurant” (not recommended) where we ate our dinner, Caliente thrived during the steam locomotive era as a place for trains to stop to take on water. These days, the train station is the town hall; as you can see below, two Union Pacific logos still flank the edifice.

Caliente is part actual village, part misdirection and part ghost town. The Exxon sign here is an illusion — this establishment does not sell fuel. The J&J Mini Mart is part of Caliente’s ghost town persona; the faded sign offers long-ago travelers a list of staples and indulgences to sustain them in their treks across this vast desert. 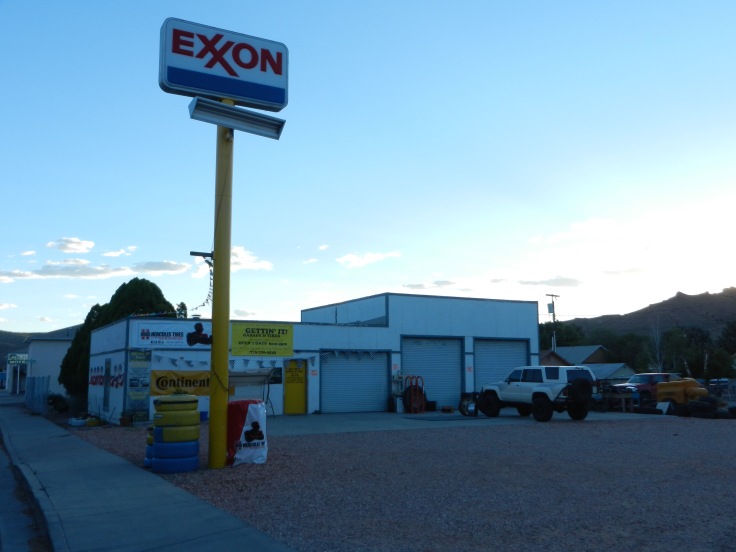 We’re staying at what is likely the nicest establishment in Caliente — The Shady Motel.

When we checked in, the desk clerk told me the wifi password is, “shadyguest.” I replied, “What a coincidence — that’s what I am!”
She looked at me seriously and said, “Everything in Nevada has two meanings.”

This is a complex and diverse state. Mountains and deserts, ghost towns doubling as working villages, huge cities and glamour along with illusory riches and, I’m sure, despair for people who came to “make it big” but now just try to make ends meet.

The desk clerk is right. Everything in Nevada has two meanings.