Record Day for Miles and Heat…Today Will Be Farther & Hotter

Yesterday, Friday, July 22nd, I started out at my mother in law’s house in Billings MT and arrived in Grand Island, NE around 11:30PM. I haven’t been sleeping well lately, so I skipped the alarm and was rewarded by waking up at 9AM — which is bad considering the distance I need to cover today as well as the forecasted heat.

I keep changing my route based on conditions, circumstances and whims that occur to me from the saddle. I was going to ride through Denver yesterday but then decided when I arrived in Cheyenne that I would turn east on I-80 there instead of riding south to I-70. That brings me eastward through Nebraska rather than Kansas, which improves the scenery somewhat and, most importantly, helped me avoid an enormous thunderstorm yesterday that featured both hail and lightning.

Trivia: You are safe in a car from lightning — not because of the rubber tires but because of the metal roof. Motorcyclists can and have been killed by lightning. Obviously, hail is bad as well on a bike.

You can see why I avoided the thunderstorm.

I was scheduled to ride through St. Louis today but it has the highest heat index for the entire country (115F), which can cause heat stress — if you’ve watched the news, you’ll note the forecasters are offering dire warnings. I’m going to head south as quickly as I can and avoid all of that if I can. That will add miles to my trip but I wear a full helmet, body armor, etc. and it gets very, very hot on the bike in that kind of weather.

Having said that, I have an evaporative cooling vest, scarf and towel, which I soak in ice water every couple of hours, which really helps. I usually ride two hours between stops, so I spend one hour reasonably cool and then the fabrics dry out and I spend the next hour stewing in my helmet.

Yesterday, I pulled over near the Little Bighorn Battle site to take a picture of a forlorn, derelict tourist attraction I’ve driven by for years —  “Fort Custer.” If you have time to stop at the real national park memorial about the battle and that idiot, Custer, you should do so sometime. I skipped it this trip but I’ve seen it before and it’s extremely interesting.

The only other pictures today I took in the evening on an exit ramp somewhere off of I-80 in Nebraska. I have two Bluetooth helmet transceivers so I can take and make phone calls, listen to music, dial in the weather radio channel, etc. I keep one charging in the top case of my bike while I use the other one. The charge lasts about six hours and then I exchange them. Since this has been a regular ritual for me, I thought I’d document the ceremony.

Finally, I took a picture of the thunderstorm I avoided. I experienced no rain at all yesterday even though I was perilously close to thunderstorms much of the day.

Time to head home. It’s 1,200 miles or so based on the circuitous route I’m taking to avoid the heat, so I don’t think I can make it in one day. If not, I’ll post from another lonely hotel tonight. If you don’t see a post, I probably made it home in the wee hours of the morning and went to bed. 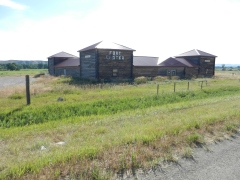 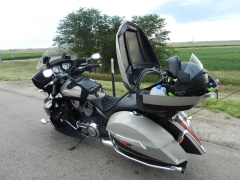